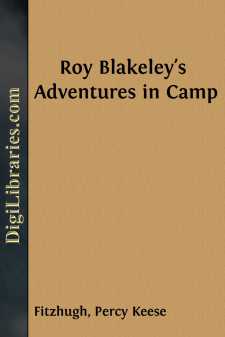 CHAPTER I TELLS YOU HOW WE GOT STARTED

Maybe you fellows will remember about how I was telling you that our troop had a house-boat that was loaned to us for the summer, by a man that lives out our way. He said we could fix it up and use it to go to Temple Camp in. It was a peach of a boat and took the hills fineвЂ” that's what we said just to jolly Pee-wee Harris, who is in our troop. He's awfully easy to jolly, but he doesn't stay mad long, that's one good thing about him.

When we first got it, it was way up a creek in the marshes and Mr. Donnelle (he's the man that owned it) took us there and showed it to us. Just as we were coming near it, a fellow jumped out of it and ran away through the marshes. We said he must be a tramp, because he was all ragged. Anyway, he acted as if he was scared, that was one sure thing.

"We should worry about him, anyway," I said; and Mr. Donnelle said he was gone and that was the end of him.

But, believe me, that wasn't the end of him. That was only the beginning of him. I didn't say anything more about him before, because I didn't know, but believe me, that fellow wasвЂ”what do you call itвЂ” you knowвЂ”destinedвЂ”to cause a lot of trouble in our young lives. That sounds like a regular author, hey? Destined.

When we began fixing the boat up, we found that one of the lockers was locked with a padlock and as long as the boat didn't belong to us, we didn't break it open, especially because there were plenty of lockers besides that one. I bet you'd like to know what was in that locker. But you're not going to find that out yet, so there's no use asking. All the time we thought Mr. Donnelle had the key to it. But, oh, just you wait.

Well, after we got it all fixed up, we couldn't decide how we'd get it down into the bay and then up the Hudson to Catskill Landing. That's where you have to go to get to Temple Camp. Temple Camp is a great big scout camp and it's right on the shore of Black LakeвЂ”oh, it's peachy. You'll see it, all right, and you'll see Jeb RushmoreвЂ”he's camp manager. He used to be a trapper out west. You'll see us all around camp-fireвЂ”you wait. Mr. Ellsworth says this story is all right so far, only to go on about the boat. Gee, I'll go faster than the boat did, that's one sure thing, leave it to me. But after we got down into the Hudson we went fast, all right. Let's see where was I?

Oh, yes, we were wondering how we'd get to camp in it because we didn't have much money in our troop, on account of being broke. Poor, but honest, hey? And it costs a lot of money to be towed and an engine would cost a hundred and fifty dollars. Nix on the engine, you can bet. But, oh, boy, there's one thing Mr....