Roy Blakeley in the Haunted Camp 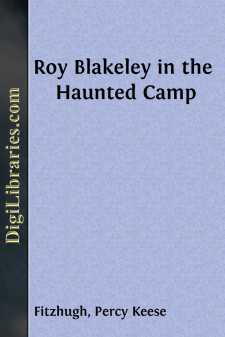 CHAPTER ITHE HOUSE IN THE LANE

One fine day in the merry month of August when the birds were singing in the trees and all the schools were closed and hikes and camping and ice cream cones were in season, and the chickens were congregated on the platform of the Hicksville, North Carolina, post office, something of far reaching consequence happened.

On that day Joshua Hicks, postmaster-general of that thriving world centre, emerged from the post office, adjusted his octagon-shaped, steel-rimmed spectacles exactly half way down his long nose, held a certain large envelope at arm’s length and contemplating it with an air of rueful perplexity said,

Then he cocked his head to one side, then to the other, squinted first his right eye, then his left, and at last inquired, of the chickens, apparently,

The chickens did not answer him; on the contrary they departed from the platform, seeing, perhaps, that there was no mail for them. With the exception of two persons the chickens were the only creatures that ever waited for the mail in Hicksville.

In the peacefulness of the Hicksville solitude the train could be heard rattling over the bridge and into the woods beyond, going straight about its business as if Hicksville did not exist.

It was no wonder that Joshua Hicks was astonished, for things like this did not happen in Hicksville every day. The last previous event had been a circus but that was nothing compared to the large envelope. For the address on this was as follows:

To a lady in Hicksville, North Carolina, who lives in a white house with the end of the porch broken and with a dog that has a collar. Maybe there’s a window broken.

In the upper left hand corner was written:

And at the lower right hand corner was the additional information:

P. S. There is a puddle outside the woodshed or a pail.

With such detailed information as this Uncle Sam, that world renowned errand boy, could hardly do otherwise than deliver this formidable document. And thus it was that W. Harris, scout, had stopped a great train, which goes to show you what boy scouts can do.

Thinking no doubt that an envelope of such imposing dimensions containing such explicit descriptive matter was entitled to the honor of rural free delivery, the postmaster-general himself took off his spectacles, put on a large straw hat and started up the road.

He came presently to a small white house some distance up a lane, where a dog with a collar greeted him with a cordial wag of the tail.

That dog, in his humble abode, did not know that his fame had gone abroad and that his personal distinction of a collar was known in the sovereign commonwealth of New Jersey, not to mention the vast cosmopolitan centre of Bridgeboro, county seat so-called, because of the comfortable propensity of the people living there to spend their time sitting down. Perhaps it might more appropriately have been called the county couch, since the inhabitants were said to be forever in a kind of doze.

But if Bridgeboro, New Jersey, dozed, Hicksville, North Carolina, had the sleeping sickness. And it did not even walk in its sleep for not a soul was to be seen about the little white house nor anywhere else.

There was no doubt, however, of its being the house in question. A pillar at the end of the porch had rotted away and the roof over the little platform was tumbling down. A pane of glass was missing from the sitting room window.

But Joshua Hicks was not going to take any chances. So he playfully ruffled the dog’s hair to make sure that the collar was around the animal’s neck and having satisfied himself of this he strolled around in back of the house for an official inspection of the puddle or the pail....