'Round the yule-log: Christmas in Norway 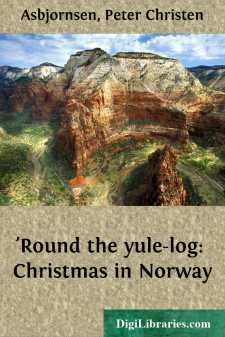 The wind was whistling through the old lime and maple trees opposite my windows, the snow was sweeping down the street, and the sky was black as a December sky can possibly be here in Christiania. I was in just as black a mood. It was Christmas Eve,—the first I was to spend away from the cosey fireside of my home. I had lately received my officer's commission, and had hoped that I should have gladdened my aged parents with my presence during the holidays, and had also hoped that I should be able to show myself in all my glory and splendour to the ladies of our parish. But a fever had brought me to the hospital, which I had left only a week before, and now I found myself in the much-extolled state of convalescence. I had written home for a horse and sledge and my father's fur coat, but my letter could scarcely reach our valley before the day after Christmas, and the horse could not be in town before New Year's Eve.

My comrades had all left town, and I knew no family with whom I could make myself at home during the holidays. The two old maids I lodged with were certainly very kind and friendly people, and they had taken great care of me in the commencement of my illness, but the peculiar ways and habits of these ladies were too much of the old school to prove attractive to the fancies of youth. Their thoughts dwelt mostly on the past; and when they, as often might occur, related to me some stories of the town, its people and its customs, these stories reminded me, not only by their contents, but also by the simple, unaffected way in which they were rendered, of a past age.

The antiquated appearance of these ladies was also in the strictest harmony with the house in which they lived. It was one of those old houses in Custom House Street, with deep windows, long dark passages and staircases, gloomy rooms and garrets, where one could not help thinking of ghosts and brownies; in short, just such a house, and perhaps it was the very one, which Mauritz Hansen has described in his story, "The Old Dame with the Hood." Their circle of acquaintances was very limited; besides a married sister and her children, no other visitors came there but a couple of tiresome old ladies. The only relief to this kind of life was a pretty niece and some merry little cousins of hers, who always made me tell them fairy tales and stories.

I tried to divert myself in my loneliness and melancholy mood by looking out at all the people who passed up and down the street in the snow and wind, with blue noses and half-shut eyes. It amused me to see the bustle and the life in the apothecary's shop across the street. The door was scarcely shut for a moment. Servants and peasants streamed in and out, and commenced to study the labels and directions when they came out in the street. Some appeared to be able to make them out, but sometimes a lengthy study and a dubious shake of the head showed that the solution was too difficult. It was growing dusk. I could not distinguish the countenances any longer, but gazed across at the old building. The apothecary's house, "The Swan," as it is still called, stood there, with its dark, reddish-brown walls, its pointed gables and towers, with weather-cocks and latticed windows, as a monument of the architecture of the time of King Christian the Fourth. The Swan looked then, as now, a most respectable and sedate bird, with its gold ring round its neck, its spur-boots, and its wings stretched out as if to fly. I was about to plunge myself into reflection on imprisoned birds when I was disturbed by noise and laughter proceeding from some children in the adjoining room, and by a gentle, old-maidish knock at my door.

On my requesting the visitor to come in, the elder of my landladies, Miss Mette, entered the room with a courtesy in the good old style; she inquired after my health, and invited me, without further ceremony, to come and make myself at home with them for the evening....