Round the Red Lamp 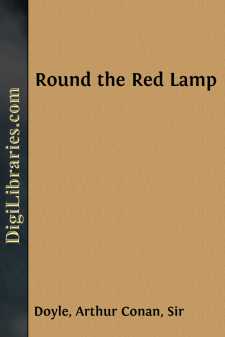 My first interview with Dr. James Winter was under dramatic circumstances. It occurred at two in the morning in the bedroom of an old country house. I kicked him twice on the white waistcoat and knocked off his gold spectacles, while he with the aid of a female accomplice stifled my angry cries in a flannel petticoat and thrust me into a warm bath. I am told that one of my parents, who happened to be present, remarked in a whisper that there was nothing the matter with my lungs. I cannot recall how Dr. Winter looked at the time, for I had other things to think of, but his description of my own appearance is far from flattering. A fluffy head, a body like a trussed goose, very bandy legs, and feet with the soles turned inwards—those are the main items which he can remember.

From this time onwards the epochs of my life were the periodical assaults which Dr. Winter made upon me. He vaccinated me; he cut me for an abscess; he blistered me for mumps. It was a world of peace and he the one dark cloud that threatened. But at last there came a time of real illness—a time when I lay for months together inside my wickerwork-basket bed, and then it was that I learned that that hard face could relax, that those country-made creaking boots could steal very gently to a bedside, and that that rough voice could thin into a whisper when it spoke to a sick child.

And now the child is himself a medical man, and yet Dr. Winter is the same as ever. I can see no change since first I can remember him, save that perhaps the brindled hair is a trifle whiter, and the huge shoulders a little more bowed. He is a very tall man, though he loses a couple of inches from his stoop. That big back of his has curved itself over sick beds until it has set in that shape. His face is of a walnut brown, and tells of long winter drives over bleak country roads, with the wind and the rain in his teeth. It looks smooth at a little distance, but as you approach him you see that it is shot with innumerable fine wrinkles like a last year's apple. They are hardly to be seen when he is in repose; but when he laughs his face breaks like a starred glass, and you realise then that though he looks old, he must be older than he looks.

How old that is I could never discover. I have often tried to find out, and have struck his stream as high up as George IV and even the Regency, but without ever getting quite to the source. His mind must have been open to impressions very early, but it must also have closed early, for the politics of the day have little interest for him, while he is fiercely excited about questions which are entirely prehistoric. He shakes his head when he speaks of the first Reform Bill and expresses grave doubts as to its wisdom, and I have heard him, when he was warmed by a glass of wine, say bitter things about Robert Peel and his abandoning of the Corn Laws. The death of that statesman brought the history of England to a definite close, and Dr. Winter refers to everything which had happened since then as to an insignificant anticlimax....