Round Games with Cards A Practical Treatise on All the Most Popular Games, with Their Different Variations, and Hints for Their Practice 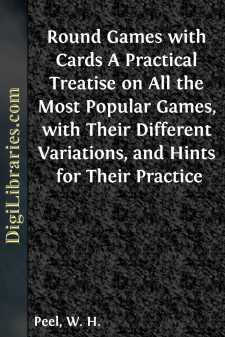 The game of Napoleon, or as it is more generally and popularly called “Nap,” was introduced into this country from the United States, it is believed, about 1865, although it is recorded that the game had previously been played for high stakes at some of the more notorious gambling clubs.

It is named after the great Napoleon, as the principal player in the game becomes, for the time being, an Ishmaelite, whose “hand” is against every man’s, and every man’s against his, as was the case with the “Grand Adventurer” in 1804–Â­15 (see Variations)—Â­whence we have the terms Wellington, Blücher, etc.

It is an admirable game for three, four, or five persons, and is also available for two and six, though four is the ideal number, and it is played with an ordinary pack of fifty-two cards. (For Nap with thirty-two card pack, see page 14).  With six persons taking part in the game the dealer stands out of the play, not dealing any cards to himself, though he receives and pays for the tricks like the others, and the same system is sometimes adopted when there are five players; as, if all the players took active part in the game, it would become most difficult to make the tricks, because more cards would be in use.

The popularity of the game is no doubt owing to the short time necessary for playing the hands, and to the fact [4] that it can be terminated at any moment, for no game or deal need exceed two or three minutes, except when a pool or “kitty” is introduced (see Variations).  In this case provision has to be made for the distribution of the amount of the kitty.

While care in playing is necessary, no great amount of skill is required to render the game diverting as an amusement, while it also affords ample scope for the exercise of speculation and the other elements of excitement.

The main idea of the play, as already stated, is for one of the competitors to stand against the united efforts of the others, who, in turn, use their powers to prevent his securing the object for which he is striving—Â­in this case to win the whole or a certain number of tricks.  The number of the tricks to be won is variable, and it depends on the value of the cards in each player’s hand to decide what number he will endeavour to secure.  The greatest possible achievement is to win the whole of the tricks (which are five in number), and theplayer who succeeds in doing this scores a “Nap,” and receives double stakes from each of his companions; if however, after declaring his intention to try for Nap he fails, he only pays a single, i.e., for five tricks; and, as will be shown later on, this condition attaching to a Nap becomes an important feature in deciding on the number of tricks to be played for, when a good hand is secured.

The only safe and perfect Nap is ace, king, queen, knave, and ten of the same suit, but as this combination of cards does not often occur in actual practice, it remains for the player to speculate on his chances with the cards he holds.  [5]

It is this speculation of possibilities which forms the principal feature of the game, and it is the ability of a competitor to make an immediate decision on this point that governs his success or failure in its practice.  Very much, however, depends on the temperament of the player.  A bold, enterprising person will risk much in the hope of winning much, and one player will declare for Nap on the same cards which another would consider only safe for three tricks, and, in like manner, one will declare for three tricks where his neighbour would hesitate to risk two....