Round About the Carpathians 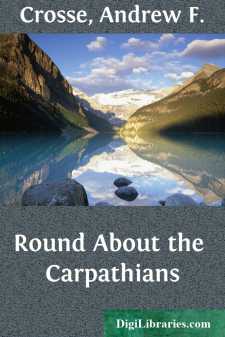 One glorious morning in June 1875, I, with the true holiday feeling at heart, for the world was all before me, stepped on board the Rustchuk steamer at Buda-Pest, intending to go down the Danube as far as Basiash.

Your express traveller, whose aim it is to get to the other end of everywhere in the shortest possible time, will take the train instead of the boat to Basiash, and there catch up the steamer, saving fully twelve hours on the way. This time the man in a hurry is not so far wrong; the Danube between Buda-Pest and the defile of Kasan is almost devoid of what the regular tourist would call respectable scenery. There are few objects of interest, except the mighty river itself.

Now the steamer has its advantages over the train, for surely nowhere in this locomotive world can a man more thoroughly enjoy "sweetly doing nothing" than on board one of these river-boats. You are wafted swiftly onward through pure air and sunshine; you have an armchair under the awning; of course an amusing French novel; besides, truth to say, there is plenty to amuse you on board. Once past Vienna, your moorings are cut from the old familiar West; the costumes, the faces, the architecture, and even the way of not doing things, have all a flavour of the East.

What a hotch-potch of races, so to speak, all in one boat, but ready to do anything rather than pull together; even here, between stem and stern of our Danube steamer, are Magyars, Germans, Servians, Croats, Roumanians, Jews, and gipsies. They are all unsatisfied people with aspirations; no two are agreed—everybody wants something else down here, and how Heaven is to grant all the prayers of those who have the grace to pray, or how otherwise to settle the Eastern Question, I will not pretend to say.

Meanwhile the world amuses itself—I mean the microcosm on board the steamer: people, ladies not excepted, play cards, drink coffee, and smoke. There is a good opportunity of studying the latest Parisian fashions, as worn by Roumanian belles; they know how to dress, do those handsome girls from Bucharest.

When steam navigation was first established on the Danube, as long ago as 1830, Prince Demidoff remarked, that "in making the Danube one of the great commercial highways of the world, steam had united the East with the West." It was a smart saying, but it was not a thing accomplished when the Prince wrote his Travels, nor is it now; for though the "Danube Steam Navigation Company" have been running their boats for nearly half a century, they are in difficulties, "chiefly," says Mr Révy, "from the neglect of all river improvements between Vienna and Buda-Pest, and between Basiash and Turn-Severin." He goes on to say that the dearest interests of the Austro-Hungarian monarchy are involved in the rectification of the course of the Danube, recommending a Royal Commission to be appointed....