Round About a Great Estate 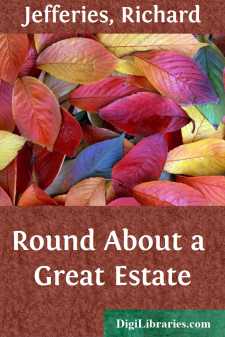 The great house at Okebourne Chace stands in the midst of the park, and from the southern windows no dwellings are visible. Near at hand the trees appear isolated, but further away insensibly gather together, and above them rises the distant Down crowned with four tumuli. Among several private paths which traverse the park there is one that, passing through a belt of ash wood, enters the meadows. Sometimes following the hedges and sometimes crossing the angles, this path finally ends, after about a mile, in the garden surrounding a large thatched farmhouse. In the maps of the parish it has probably another name, but from being so long inhabited by the Lucketts it is always spoken of as Lucketts' Place.

The house itself and ninety acres of grass land have been their freehold for many generations; in fact, although there is no actual deed of entail, the property is as strictly preserved in the family and descends from heir to heir as regularly as the great estate and mansion adjacent. Old Hilary Luckett—though familiarly called 'old,' he is physically in the prime of life—is probably about the most independent man in the county. Yet he is on terms of more than goodwill with the great house, and rents one of the largest farms on the estate, somewhere between six and seven hundred acres. He has the right of shooting, and in the course of years privilege after privilege has been granted, till Hilary is now as free of the warren as the owner of the charter himself. If you should be visiting Okebourne Chace, and any question should arise whether of horses, dog, or gun, you are sure to be referred to Hilary. Hilary knows all about it: he is the authority thereabout on all matters concerning game. Is it proposed to plant fresh covers? Hilary's opinion is asked. Is it proposed to thin out some of the older trees; what does Hilary say?

It is a fact that people really believe no part of a partridge is ever taken away after being set before him. Neither bones nor sinews remain: so fond is he of the brown bird. Having eaten the breast, and the juicy leg and the delicate wing, he next proceeds to suck the bones; for game to be thoroughly enjoyed should be eaten like a mince-pie, in the fingers. There is always one bone with a sweeter flavour than the rest, just at the joint or fracture: it varies in every bird according to the chance of the cooking, but, having discovered it, put it aside for further and more strict attention. Presently he begins to grind up the bones in his strong teeth, commencing with the smallest. His teeth are not now so powerful as when in younger days he used to lift a sack of wheat with them, or the full milking-bucket up to the level of the copper in the dairy. Still they gradually reduce the slender skeleton. The feat is not so difficult if the bird has been well hung.

He has the right to shoot, and need take no precautions. But, in fact, a farmer, whether he has liberty or not, can usually amuse himself occasionally in that way. If his labourer sees him quietly slipping up beside the hedge with his double-barrel towards the copse in the corner where a pheasant has been heard several times lately, the labourer watches him with delight, and says nothing....