Roumania Past and Present 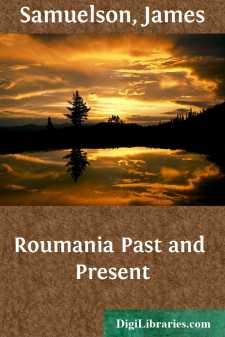 The kingdom of Roumania is situated between 22° 29' and 29° 42' east of Greenwich, and between 43° 37' and 48° 13' north of the equator. Its general boundaries are, on the east and south, the Pruth and the Danube, with the exception of the Dobrudscha south of the latter river, at its embouchures, and on the west and north by the Carpathian mountains, along whose heights the boundary line runs. The limit which separates it from Bulgaria, on the south-east leaves the Danube just east of Silistria, and runs irregularly in a south-easterly direction until it reaches the Black Sea, about nine miles and a half south of Mangalia. (North-east of this line runs the Roumanian Railway from Cernavoda to Constanta or Kustendjie, and south-west of it the Bulgarian line from Rustchuk to Varna.) The kingdom presents the form of an irregular blunted crescent, and it is very difficult to speak of its 'length' and 'breadth;' but so far as we are able to estimate its dimensions they are as follows:—A straight line drawn from Verciorova, the boundary on the west at the 'Iron Gates' of the Danube, to the Sulina mouth of the same river on the east, is about 358 miles; and another from the boundary near Predeal in the Carpathians, on the line of railway from Ploiesti to Kronstadt, Transylvania, to the southernmost limit below Mangalia on the Black Sea, is about 188 miles.

The approximate area of Roumania is 49,250 square miles, and when it is added that the area of England and Wales is nearly 51,000 square miles, the reader will be able to form an estimate of the extent of the country. But having made this comparison, let us carry it a step further. According to the latest estimates of the population there are about 5,376,000 inhabitants in Roumania against 25,968,286 (according to last year's census) in England and Wales; in other words, with an area equal to that of England, Roumania has about one-fifth of its population, or about the same as Ireland.

The general configuration of the surface of the country may be described as an irregular inclined plane sloping down from the summits of the Carpathians to the northern or left bank of the Danube, and it is traversed by numerous watercourses taking their rise in the mountains and falling into the great river, which render it well adapted for every kind of agricultural industry....