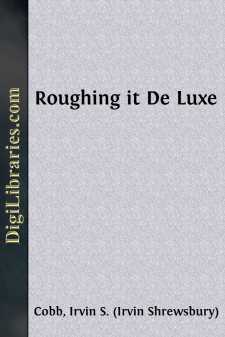 It is generally conceded that the Grand Cañon of Arizona beggars description. I shall therefore endeavor to refrain from doing so. I realize that this is going to be a considerable contract. Nearly everybody, on taking a first look at the Grand Cañon, comes right out and admits its wonders are absolutely indescribable—and then proceeds to write anywhere from two thousand to fifty thousand words, giving the full details. Speaking personally, I wish to say that I do not know anybody who has yet succeeded in getting away with the job.

In the old days when he was doing the literature for the Barnum show, Tody Hamilton would have made the best nominee I can think of. Remember, don't you, how when Tody started in to write about the elephant quadrille you had to turn over to the next page to find the verb? And almost any one of those young fellows who write advertising folders for the railroads would gladly tackle the assignment; in fact, some of them already have—but not with any tumultuous success.

In the presence of the Grand Cañon, language just simply fails you and all the parts of speech go dead lame. When the Creator made it He failed to make a word to cover it. To that extent the thing is incomplete. If ever I run across a person who can put down on paper what the Grand Cañon looks like, that party will be my choice to do the story when the Crack of Doom occurs. I can close my eyes now and see the headlines: Judgment Day a Complete Success! Replete with Incident and Abounding in Surprises—Many Wealthy Families Disappointed—Full Particulars from our Special Correspondent on the Spot!

Starting out from Chicago on the Santa Fé, we had a full trainload. We came from everywhere: from peaceful New England towns full of elm trees and oldline Republicans; from the Middle States; and from the land of chewing tobacco, prominent Adam's apples and hot biscuits—down where the r is silent, as in No'th Ca'lina. And all of us—Northerners, Southerners, Easterners alike—were actuated by a common purpose—we were going West to see the country and rough it—rough it on overland trains better equipped and more luxurious than any to be found in the East; rough it at ten-dollar-a-day hotels; rough it by touring car over the most magnificent automobile roads to be found on this continent. We were a daring lot and resolute; each and every one of us was brave and blithe to endure the privations that such an expedition must inevitably entail. Let the worst come; we were prepared! If there wasn't any of the hothouse lamb, with imported green peas, left, we'd worry along on a little bit of the fresh shad roe, and a few conservatory cucumbers on the side. That's the kind of hardy adventurers we were!

Conspicuous among us was a distinguished surgeon of Chicago; in fact, so distinguished that he has had a very rare and expensive disease named for him, which is as distinguished as a physician ever gets to be in this country. Abroad he would be decorated or knighted. Here we name something painful after him and it seems to fill the bill just as well. This surgeon was very distinguished and also very exclusive. After you scaled down from him, riding in solitary splendor in his drawing room, with kitbags full of symptoms and diagnoses scattered round, we became a mixed tourist outfit. I would not want to say that any of the persons on our train were impossible, because that sounds snobbish; but I will say this—some of them were highly improbable.

There was the bride, who put on her automobile goggles and her automobile veil as soon as we pulled out of the Chicago yards and never took them off again—except possibly when sleeping....