Rouen, It's History and Monuments A Guide to Strangers 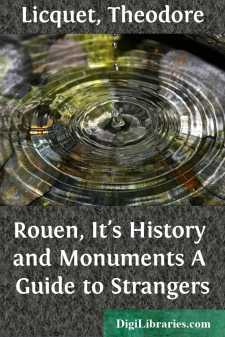 Cæsar, in his Commentaries does not speak of Rouen; Pomponius Mela, does not mention it in his Geography; Ptolemy is the first author who has noticed it. This observation alone will shew the absurdity of the numerous etymologies assigned to its name of Rothomagus, of which we have made Rouen. The least unlikely are those which have been taken from the primitive language of the country; but, even then we can only form conjectures more or less vague, as, in deriving Rothomagus from two celtic words, some have considered that this name signifies a great town; others, a town on the bank of a river; while others again a town where duties were paid.

Ptolemy then gives us a commencement to the history of Rouen. In his lifetime, that is to say, during the first part of the second-century, Rouen bore the name of Rothomagus; it was the capital of the country of the Velocasses.

If Rouen, as a town of Gaul, is little known to us, Rouen as a Roman town is more so. Its existence is no longer doubtful; its importance even is proved. All suppositions join to make one think that the Romans were the first who erected external fortifications round the town. Remains of walls evidently built by that people, were discovered in 1789 in the cellars of a house which had been built on the edge of the first ditch. These buildings extended westward even under the church of Saint-Lo, and it is very probable that they joined towards the east with other remains of roman architecture, found in digging the foundations of another house, no 2, rue de la Chaîne.

Here then, is the first boundary of Rouen under the Romans, and drawn-out by them: on the south the Seine, the waters of which at this time, came as high as the line occupied at present by the rue des Bonnetiers, the place de la Calende, that of Notre-Dame on its southern portion, and thus along to the extremity of the rue aux Ours. On the north, the ditch which existed the whole length of the streets de l'Aumône, and Fossés-Louis-VIII, that is to say, from the river Robec at the east, to the rue de la Poterne at the west. From the latter point draw a line in a southern direction passing across the Mew-Market, the rue Massacre and the rue des Vergetiers, to the rue aux Ours and you will have the western limit. The eastern limit is naturally marked out by the course of the Robec. The town maintained this boundary till the Xth century, the period of the establishment of Rollon, in this portion of Neustria to which the Normans gave their name.

I have already said, that Rouen, was an important town under the Romans, and this truth is proved, by the fact. It does not figures, it is true, in the notice of the dignities of the Empire, as the seat of a superior magistrate, but, nevertheless it is spoken of, as a town having a garrison; and, it was there that the præfectus militum Ursariensium or, as we should say in English, the colonel of the regiment of the Ursarians, resided.

The ecclesiastical annals also, prove the importance of Rouen at this period....