Rosa's Quest The Way to the Beautiful Land 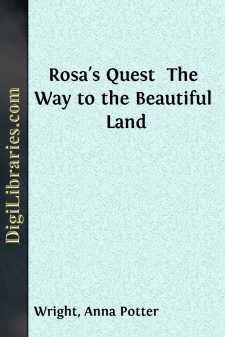 "Well, fer land sakes then, hurry up, you lazy girl! I've been a-hollerin' till my throat's sore. You're always underfoot when you ain't wanted, then when you are wanted, you're no place to be found. If you wuz my girl, you'd be learnt to know more'n you know now, I can tell you that. I believe in young uns amountin' to somethin', but it's mighty little you know."

"But, Mis' Gray," faltered poor little Rosa, "mother was coughing awful, and I didn't hear you."

"Yes, your ma ag'in. I don't know what you'll have fer an excuse when she's gone, or what'll become of you either. I know one thing, though; I won't have you. But it'd be a heap sight better fer you if I would, and a real blessin', too."

"There, there, Sary, don't talk to the child so! Never mind, Rosa dear, Sary don't mean it. Sary's a good woman, yes, a very good woman."

"I do too mean it, father, and I jest want you to keep still. You always take her part. Yes, I am a good woman, or I'd never kep' you after poor Tom got killed. I have to sew my finger ends off to git us enough to eat and to pay the rent. I always did have bad luck from the day I married Tom Gray. He would insist on keepin' you, and you wuz sick that summer he couldn't git no work. He'd walk all day a-tryin' to find somethin' to do, then set up all night with you, though I told him it wuzn't necessary. I washed and I sewed and I done everything, but our little home had to go. I thought then, and I think now, that we could a-kep' it, if it hadn't been fer you. If Tom could git hold of a cent at all, it would go fer medicine, or somethin' fer you to eat. After you got well, he found a place to work, and wuz a-tryin' to git back the home, when he went and got killed, a-tryin' to keep a poor, good-fer-nothin' beggar from bein' run over by the streetcar. All he left me wuz you to look after, and you ain't never had a bit of sense, since the day he wuz brought home to me all torn and bleedin'. There ain't many that's had as much to put up with as I have. I guess most daughters-in-law would jest have told you to leave, but no, I've been a-keepin' you fer the last five years, and no tellin' how much longer you'll live! And you didn't mind me this mornin', and I sprained my ankle a-goin'—"

"Grandpa," broke in Rosa, heedless of Mrs. Gray's irascible tongue, "what does she mean about mother going away?"

"Why, I don't know, child; I ain't heard no talk about her leavin', but then I git things so mixed up since Tom died."

"Rosa Browning, I didn't call you in here to ask foolish questions. I want you to deliver this package, and quick, too. If you hadn't talked so much, you could be well on your way by this time. It goes to that lady over on Lake Avenue, where I sent you once before."

"Oh, where I heard the beautiful music?"

"Yes, but don't you loiter on your way to listen to no music! Fine music ain't for the likes of us here on Burton street....