Romance of Roman Villas (The Renaissance) 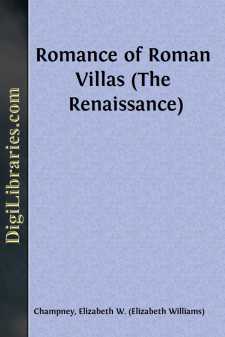 Add to My Favorites
Published: 9 years ago
Downloads: 129
Rating: (0 Votes)

STILL unrivalled, after the lapse of four centuries the villas of the great cardinals of the Renaissance retain their supremacy over their Italian sisters, not, as once, by reason of their prodigal magnificence but in the appealing charm of their picturesque decay.

The centuries have bestowed a certain pathetic beauty, they have also taken away much, and the sympathy which these ruined pleasure palaces evoke whets our curiosity to know what they were like in their heyday of joyous revelling.

If we run down the list of the nobler villas of Rome we will find that, with few exceptions, they were built by princes of the purple, and that the names they bear are not Roman but those of the ruling families of other Italian cities.

That the sixteenth century should have produced the most palatial residences ever inhabited by prelates was but a natural outcome of the conditions then existing. The society of Rome was a hierarchical aristocracy made up of the younger sons of every powerful and ambitious family of Italy, and the red hat was so greatly desired not for the honour or emoluments of the cardinalcy per se but because it was a step to the papacy.

"To an Italian," says Alfred Austin, "it must seem a reproach never to have had a pope in the family, and you will with difficulty find a villa of any pretension, certainly not in Frascati, where memorial tassels and tiara carven in stone over porch and doorway do not attest pontifical kinship."

The young cardinal's first move in the game which he was to play was at all expense to create an impression, and if, as in the case of Ippolito d'Este, he had no benevolent uncle in St. Peter's chair to guide his career, the parental coffers were drawn upon recklessly and the cadet of the great house led a more extravagant life in his Roman villa than the duke his elder brother in his provincial court. The object of his ambition once attained the new Pope unscrupulously enriched his family, and endeavoured to make his office hereditary by elevating his favourite nephew to the cardinalcy, and endowing this future candidate for the papacy with means from the revenues of the Church to purchase the votes of his rivals. This is the constantly reiterated history of the builders of the palaces and villas of Rome.

Sixtus IV. made the fortunes of his numerous de la Rovere and Riario nephews,—one of whom, Pietro, Cardinal of San Sisto, for whom Bramante built the Cancellaria Palace, set the pace for his comrades of the Sacred College by squandering in two years the enormous sum of $2,800,000. Cardinal Raphael Riario of the next generation began the most beautiful of all villas, Lante, which three other cardinals subsequently perfected.

Leo X. after his election as pope, proved to be a greater spendthrift than Sixtus IV., for he not only repaired the broken fortunes of the Medici but eclipsed his father as a patron of art, making the erection of monumental buildings and the collection of objects of art a mania among all men of wealth and culture. Cardinal Giulio (afterwards Clement VII.) in the Villa Madama, and Cardinal Ferdinando in the Villa Medici sustained the family tradition, but Cardinal Alexander Farnese (Pope Paul III.) outrivalled them both, by filling the Farnese palace with the most valuable collections ever amassed by a private individual.

Immediately succeeding Alexander Farnese Julius III. built the noble Villa di Papa Giulio, and Pius IV. the charming Villa Pia; but nepotism did not scandalously reassert itself until the last quarter of the century, when the immense Villa Aldobrandini was erected by a nephew of Clement VIII.

Pope Paul V. in his turn bestowed more than a million dollars upon his Borghese nephews, to one of whom, Cardinal Scipione, we owe the delightful Villa Borghese, just outside the Porta del Popolo.

Early in the next century the evil attained greater proportions. Olimpia Pamphili, whose name and memory are perpetuated in the villa built by her son, received from Pope Innocent X. more than two millions. But Innocent seems to have a fair claim to his name when compared with his immediate predecessor Urban VIII. who conferred upon his nephews, the brothers Barberini, sums amounting to one hundred and five millions!

An architecture of pompous ostentation and riotous overloading of ornament, the Baroque, now took the place of the classical beauty of the Renaissance and art degraded became the slave of wealth, until the great Cardinal Albani erected his villa to serve as her temple.

We are ready to expect great results in the villas and palaces of the millionaires of the earlier half of the sixteenth century when we reflect that they were executed by Bramante, Peruzzi, San Gallo, Michael Angelo, and Raphael with a host of lesser men who would have been great in any other age, and that the ruins of imperial Rome furnished them with models for their designs and an inexhaustible quarry of statues, columns, mosaics, and other materials.

The point of view of the present volume is the life rather than the art of these villas, but it is not possible to ignore the stimulus which the daily discovery of the masterpieces of ancient art afforded to the artists of the day, and the connoisseurship imposed upon the rivalling patrons and collectors.

In the chapters entitled: "The Finding of Apollo" and "The Lure of Old Rome" I have striven to depict the influence of these discoveries upon such sensitive souls as those of Raphael and Ligorio, and the gradual education of the financier Chigi and Cardinal Ippolito d'Este in the refinements of dilettantism.

But the Fornarina left a more potent impression on Raphael's art than the Apollo Belvedere, and her memory and that of Imperia still haunt the villa of the Farnesina indissolubly united with that of the master of art and the master of revels.

In the noble Colonna palace the personality most vividly present to-day is that of Vittoria Colonna, making good the boast of Michael Angelo's sonnet,—

"So I can give long life to both of usIn either way by colour or by stone,Making the semblance of thy face and mine,Centuries hence when both are buried thusThy beauty and my sadness shall be shownAnd men shall say, 'For her 't was right to pine.'"

But if Michael Angelo carved or painted Vittoria the portrait is lost; and it is to his love, not to his art that she owes her immortality....