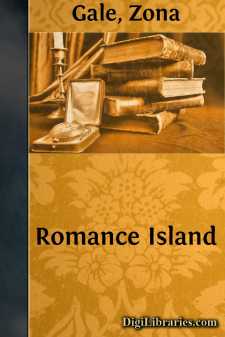 Add to My Favorites
Published: 8 years ago
Downloads: 166
Rating: (0 Votes)

As The Aloha rode gently to her buoy among the crafts in the harbour, St. George longed to proclaim in the megaphone's monstrous parody upon capital letters:

"Cat-boats and house-boats and yawls, look here. You're bound to observe that this is my steam yacht. I own her—do you see? She belongs to me, St. George, who never before owned so much as a piece of rope."

Instead—mindful, perhaps, that "a man should not communicate his own glorie"—he stepped sedately down to the trim green skiff and was rowed ashore by a boy who, for aught that either knew, might three months before have jostled him at some ill-favoured lunch counter. For in America, dreams of gold—not, alas, golden dreams—do prevalently come true; and of all the butterfly happenings in this pleasant land of larvæ, few are so spectacular as the process by which, without warning, a man is converted from a toiler and bearer of loads to a taker of his bien. However, to none, one must believe, is the changeling such gazing-stock as to himself.

Although countless times, waking and sleeping, St. George had humoured himself in the outworn pastime of dreaming what he would do if he were to inherit a million dollars, his imagination had never marveled its way to the situation's less poignant advantages. Chief among his satisfactions had been that with which he had lately seen his mother—an exquisite woman, looking like the old lace and Roman mosaic pins which she had saved from the wreck of her fortune—set off for Europe in the exceptional company of her brother, Bishop Arthur Touchett, gentlest of dignitaries. The bishop, only to look upon whose portrait was a benediction, had at sacrifice of certain of his charities seen St. George through college; and it made the million worth while to his nephew merely to send him to Tübingen to set his soul at rest concerning the date of one of the canonical gospels. Next to the rich delight of planning that voyage, St. George placed the buying of his yacht.

In the dusty, inky office of the New York Evening Sentinel he had been wont three months before to sit at a long green table fitting words about the yachts of others to the dreary music of his typewriter, the while vaguely conscious of a blur of eight telephone bells, and the sound of voices used merely to communicate thought and not to please the ear. In the last three months he had sometimes remembered that black day when from his high window he had looked toward the harbour and glimpsed a trim craft of white and brass slipping to the river's mouth; whereupon he had been seized by such a passion to work hard and earn a white-and-brass craft of his own that the story which he was hurrying for the first edition was quite ruined.

"Good heavens, St. George," Chillingworth, the city editor, had gnarled, "we don't carry wooden type. And nothing else would set up this wooden stuff of yours. Where's some snap? Your first paragraph reads like a recipe. Now put your soul into it, and you've got less than fifteen minutes to do it in."