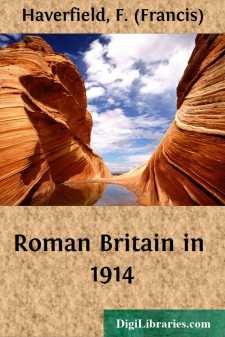 The contents of the present volume are of much the same character as those of its predecessor, 'Roman Britain in 1913'. The first section gives a retrospect of the chief finds made in 1914, so far as they are known to me. The second section is a more detailed and technical survey of the inscriptions found in Britain during that year. The third and longest section is a summary, with some attempt at estimate and criticism, of books and articles dealing with Roman Britain which appeared in 1914 or at least bear that date on cover or title-page. At the end I have added, for convenience, a list of the English archaeological and other publications which at least sometimes contain noteworthy articles relating to Roman Britain.

The total, both of finds and of publications, is smaller than in 1913. In part the outbreak of war in August called off various supervisors and not a few workmen from excavations then in progress; in one case it prevented a proposed excavation from being begun. It also seems to have retarded the issue of some archaeological periodicals. But the scarcity of finds is much more due to natural causes. The most extensive excavations of the year, those of Wroxeter and Corbridge, yielded little; they were both concerned with remains which had to be explored in the course of a complete uncovering of those sites but which were not in themselves very interesting. The lesser sites, too, were somewhat unproductive, though at least one, Traprain Law, is full of promise for the future, and good work has been done in the systematic examination of the fort at Ambleside and of certain rubbish-pits in London. In one case, that of Holt (), where excavations have for the present come to an end, I have thought it well to include a brief retrospect of the whole of a very interesting series of finds and, aided by the kindness of the excavator, Mr. Arthur Acton of Wrexham, to add some illustrations of notable objects which have not yet appeared elsewhere in print.

A. RETROSPECT OF FINDS MADE IN 1914 i-xiv. Finds relating to the Roman Military Occupation.

(i) The exploration of the Roman-seeming earthworks in northern Scotland which Dr. Macdonald and I began in 1913 at Ythan Wells, in Aberdeenshire (Report for 1913, p. 7), was continued in 1914 by Dr. Macdonald at Raedykes, otherwise called Garrison Hill, three miles inland from Stonehaven. Here Roy saw and planned a large camp of very irregular outline, which he took to be Roman. Since his time the ramparts have been somewhat ploughed down, but Dr. Macdonald could trace them round, identify the six gateways, and generally confirm Roy's plan, apart from its hill-shading. The ramparts proved to be of two kinds: part was built solidly of earth, with a deep ditch of Roman shape strengthened in places with clay, in front of it, while part was roughly piled with stones and defended only by a shallow rounded ditch. This difference seemed due to the differing nature of the ground; ditch and rampart were slighter where attack was less easy....