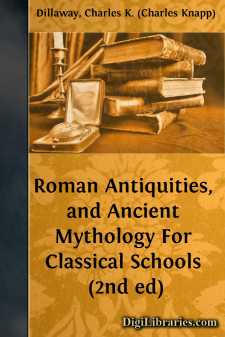 CHAPTER I. Foundation of Rome and Division of its Inhabitants.

Ancient Italy was separated, on the north, by the Alps, from Germany. It was bounded, on the east and north-east, by the Adriatic Sea, or Mare Superum; on the south-west, by a part of the Mediterranean, called the Tuscan Sea, or Mare Inferum; and on the south, by the Fretum Siculum, called at present the strait of Messina.

The south of Italy, called Græcia Magna, was peopled by a colony from Greece. The middle of Italy contained several states or confederacies, under the denominations of Etrurians, Samnites, Latins, Volsci, Campanians, Sabines, &c. And the north, containing Gallia Cisalpina and Liguria, was peopled by a race of Gauls.

The principal town of the Latin confederacy was Rome. It was situated on the river Tiber, at the distance of sixteen miles from its mouth.

Romulus is commonly reported to have laid its foundations on Mount Palatine, A. M. 3251, B. C. 753, in the third year of the 6th Olympiad.

Rome was at first only a small fortification; under the kings and the republic, it greatly increased in size; but it could hardly be called magnificent before the time of Augustus Cæsar. In the reign of the Emperor Valerian, the city, with its suburbs, covered a space of fifty miles; at present it is scarcely thirteen miles round.

The greatest number of inhabitants in Rome was four millions; but its average population was not more than two millions.

The people were divided into three tribes, and each tribe into ten curiæ. The number of tribes was afterwards increased to thirty-five.

The people were at first only separated into two ranks; the Patrician and Plebeian; but afterwards the Equites or Knights were added; and at a later period, slavery was introduced—making in all, four classes: Patricians, Knights, Plebeians, and Slaves.

The Patrician order consisted of those families whose ancestors had been members of the Senate. Those among them who had filled any superior office, were considered noble, and possessed the right of making images of themselves, which were transmitted to their descendants, and formed part of their domestic worship.

The Plebeian order was composed of the lowest class of freemen. Those who resided in the city, were called “Plebs urbana;” those who lived in the country, “Plebs rustica.” But the distinction did not consist in name only—the latter were the most respectable.

The Plebs urbana consisted not only of the poorer mechanics and laborers, but of a multitude of idlers who chiefly subsisted on the public bounty, and whose turbulence was a constant source of disquietude to the government. There were leading men among them, kept in pay by the seditious magistrates, who used for hire to stimulate them to the most daring outrages.

Trade and manufactures being considered as servile employments, they had no encouragement to industry; and the numerous spectacles which were exhibited, particularly the shows of gladiators, served to increase their natural ferocity....