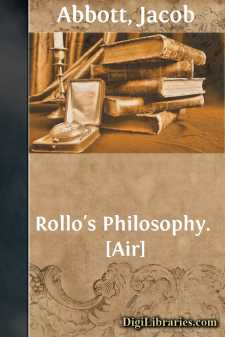 LOST IN THE SNOW.

One pleasant morning, very early in the spring, Rollo's cousin Lucy came to call for Rollo to go on an expedition, which they had planned the day before. It was near the end of March, and the snow had become so consolidated by the warm sun in the days, and the hard frosts at night, that it would bear the children to walk upon it. The children called it the crust; but it was not, strictly speaking, a crust, for the snow was compact and solid, not merely upon the top, but nearly throughout the whole mass, down to the ground.

Rollo and Lucy were going to have an expedition upon the crust. Rollo had a sled, and they were going to put upon the sled such things as they should need, and Rollo was to draw it, while Lucy and Nathan, Rollo's little brother, were to walk along by his side.

Rollo's sled was ready at the back door, when Lucy came. Lucy brought with her some provisions for a luncheon, in a basket. This was her part of the preparation. Rollo got his axe, and one or two boards a little longer than the sled, which he said were to make seats. He also had a tinder-box, and some matches, to enable him to make a fire. When all things were ready, the three children set out together.

Rollo drew the sled, with the boards, the basket, and some other things upon it, all bound together securely with a cord. The load appeared to be considerable in bulk, but it was not heavy, and Rollo drew it along very easily. They were not obliged to confine themselves to the roads and paths, for the snow was hard in every direction, and they could go over the fields wherever they pleased. In one place, where the snow was very deep on the side of a hill, they went right over the top of a stone wall.

It was a cloudy day, but calm. This was favorable. The sky being overcast, kept the sun from thawing the snow; but yet their father told them that probably it would begin to grow soft before they came home, and, if so, they would have to come home in a certain sled road, which Jonas had made that winter by hauling wood. He advised them not to encamp at any great distance from the sled road.

They came at last to a pleasant spot on the margin of a wood, near where there was a spring. The rocks around the spring were all covered with snow, and the little stream, which in summer flowed from the spring, was frozen and buried up entirely out of sight. But the spring itself was open, which Rollo said was very fortunate, as they might want some water to drink.

Here they encamped. Rollo cut some stakes, which he drove down into the snow, and contrived to make a rude sort of table with his boards. He also cut a large number of hemlock branches, which Lucy and Nathan dragged out and spread around the table for them to sit upon. Then Rollo built a fire of sticks, which he gathered in the wood. The ground was covered with snow, so that it would have been very difficult for him to have found any sticks, were it not that some kinds of trees, in the woods, have a great many small branches near the bottom, which are dead and dry....