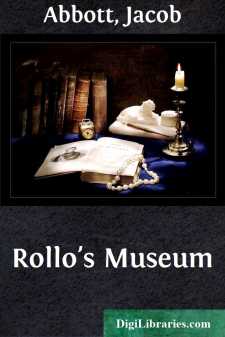 It happened one summer, when Rollo was between seven and eight years of age, that there was a vacation at the school which he was attending at that time. The vacation commenced in the latter part of August, and was to continue for four or five weeks. Rollo had studied pretty hard at school, and he complained that his eyes ached sometimes.

The day before the vacation commenced, his father became somewhat uneasy about his eyes; and so he took him to a physician, to see what should be done for them. The physician asked Rollo a good many questions, all of which Rollo endeavored to answer as correctly as he could.

At length, the physician told Rollo’s father that all he needed was to let his eyes rest. “I think he had better not use them at all,” said he, “for reading or writing, for several weeks; and not to be out much in the hot sun.”

Rollo felt very much rejoiced at hearing this prescription, though still he looked very sober; for he felt somewhat awed and restrained by being in the doctor’s office. There were a good many large books, in cases upon one side of the room; and strange, uncouth-looking pictures hanging up, which, so far as Rollo could see, did not look like any thing at all. Then there was an electric machine upon a stand in one corner, which he was afraid might in some way “shock” him; and some frightful-looking surgical instruments in a little case, which was open upon the table in the middle of the room.

In fact, Rollo was very glad to escape safely out of the doctor’s office; and he was, if possible, still more rejoiced that he had so light and easy a prescription. He had thought that, perhaps, the doctor would put something on his eyes, and bandage them up, so that he could not see at all; or else give him some black and bitter medicines to take every night and morning.

Instead of that, he said to himself, as he came out at the door, “I have only got to keep from studying, and that will be capital. I can play all the time. True, I can’t read any story books; but, then, I am willing to give the story books up, if I don’t have to study.”

Rollo had usually been obliged to read, or study, or write a little, even in vacations; for his mother said that boys could not be happy to play all the time. Rollo, however, thought that she was mistaken in this. It is true that she had sometimes allowed him to try the experiment for a day or two, and in such cases he had always, somehow or other, failed of having a pleasant time. But then he himself always attributed the failure to some particular difficulty or source of trouble, which happened to come up then, but which would not be likely to occur again.

In fact, in this opinion Rollo was partly correct. For it was true that each day, when he failed of enjoying himself, there was some peculiar reason for it, and exactly that reason would not be likely to exist another day. But then the difficulty with playing, or attempting to amuse one’s self all the time, is, that it produces such a state of mind, that almost any thing becomes a source of uneasiness or dissatisfaction; and something or other is likely to occur, or there will be something or other wanting, which makes the time pass very heavily along....