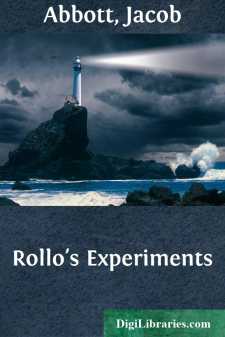 One day, when Rollo was about seven years old, he was sitting upon the steps of the door, and he heard a noise in the street, as of some sort of carriage approaching. A moment afterwards, a carryall came in sight. It drove up to the front gate, and stopped. Rollo’s father and mother and his little brother Nathan got out. His father fastened the horse to the post, and came in.

When Rollo first heard the noise of the carryall, he was sitting still upon the steps of the door, thinking. He was thinking of something that Jonas, his father’s hired boy, had told him about the sun’s shining in at the barn door. There was a very large double door to Rollo’s father’s barn, and as this door opened towards the south, the sun used to shine in very warm, upon the barn floor, in the middle of the day.

Rollo and Jonas had been sitting there husking some corn,—for it was in the fall of the year;—and as it was rather a cool autumnal day, Rollo said it was lucky that the sun shone in, for it kept them warm.

“Yes,” said Jonas; “and what is remarkable, it always shines in farther in the winter than it does in the summer.”

“And what is the reason?” asked Rollo.

“I don’t know,” said Jonas, “unless it is because we want it in the barn more in the winter than we do in the summer.”

“O, I don’t believe the sun moves about in the heavens, to different places, only just to shine into barn doors.”

“Why, it keeps a great many farmers’ boys more comfortable,” said Jonas.

“Is it so in all barns?” asked Rollo.

“I suppose so,” said Jonas.

After some further conversation on the subject, the boys determined to watch the reflection of the sun’s beams upon the barn floor for a good many days, and to mark the place that it came in to, at noon every day, with a piece of chalk. It was only a few minutes before the carryall came up, that they had determined upon this, and had marked the place for that day; and then Rollo had come out of the barn, and was sitting upon the door step, thinking of the subject, when his reflections were interrupted in the manner already described.

So, when Rollo saw his father getting out of the carryall, he ran to meet him, and called out to him, talking very loud and rapidly,

“Father, Jonas says that the sun shines farther in, upon the barn floor, in winter than in summer;—does it, do you think?”

But this was not a proper time for Rollo to bring up his philosophical question. His father had a carpet bag and several packages in his hands, and he was also conducting Rollo’s mother in, and thinking about the horse and carryall. So he told Rollo that he must not speak to him then, for he could not attend to him.

Rollo then walked along back into the yard, and began to think of the subject of the sun’s shining in at the south door. He looked up towards the sun, and began to consider what sort of a change in its place, at noon, on different days, would be necessary in order to account for its shining in more at south doors and windows, on some days, than on others. He reflected that if the sun were exactly overhead, at noon, it could not shine in at any doors at all; for the rays would then strike perpendicularly down the sides of the houses. While he was standing thus, lost in thought, looking up to the sun, with his arm across his forehead, to shelter his eyes a little from the dazzling rays, he suddenly felt the pressure of two soft hands upon his ears, as of somebody who had come up behind him. He turned round, and found his cousin Lucy standing there.

Lucy asked him what he was thinking of, and he told her....