Rollo on the Rhine 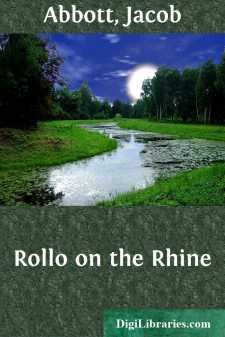 The Approach To Cologne.

If a man were to be raised in a balloon high enough above the continent of Europe to survey the whole of it at one view, he would see the land gradually rising from the borders of the sea on every side, towards a portion near the centre, where he would behold a vast region of mountainous country, with torrents of water running down the slopes and through the valleys of it, while the summits were tipped with perpetual snow. The central part of this mass of mountains forms what is called Switzerland, the eastern part is the Tyrol, and the western Savoy. But though the men who live on these mountains have thus made three countries out of them, the whole region is in nature one. It constitutes one mighty mass of mountainous land, which is lifted up so high into the air that all the summits rise into the regions of intense and perpetual cold, and so condense continually, from the atmosphere, inexhaustible quantities of rain and snow.

The water which falls upon this mountainous region must of course find its way to the sea. In doing so the thousands of smaller torrents unite with each other into larger and larger streams, until at length they make four mighty rivers—the largest and most celebrated in Europe. All the streams of the southern slopes of the mountains form one great river, which flows east into the Adriatic. This river is the Po. On the western side the thousands of mountain torrents combine and form the Rhone, which, making a great bend, turns to the southward, and flows into the Mediterranean. On the eastern side the water can find no escape till it has traversed the whole continent to the eastward, and reached the Black Sea. This stream is the Danube. And finally, on the north the immense number of cascades and torrents which come out from the glaciers, or pour down the ravines, or meander through the valleys, or issue from the lakes, of the northern slope of the mountains, combine at Basle, and flow north across the whole continent, nearly six hundred miles, to the North Sea. This river is the Rhine.

All this, which I have thus been explaining, may be seen very clearly if you turn to any map of Europe, and find the mountainous region in the centre, and then trace the courses of the four great rivers, as I have described them.

It would seem that the country through which the River Rhine now flows was at first very uneven, presenting valleys and broad depressions, which the waters of the river filled, thus forming great shallow lakes, that extended over very considerable tracts of country. In process of time, however, these lakes became filled with the sediment which was brought down by the river, and thus great flat plains of very rich and level land were formed. At every inundation of the river, of course, these plains, or intervals, as they are sometimes called, would be overflowed, and fresh deposits would be laid upon them; so that in the course of ages the surface of them would rise several feet above the ordinary level of the river....