Rollo on the Atlantic 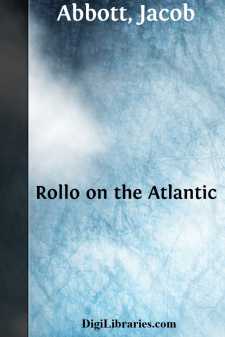 When Rollo was about twelve years of age, he made a voyage to Europe under rather extraordinary circumstances. He went alone; that is to say, he had no one to take care of him. In fact, in addition to being obliged to take care of himself, he had also his little sister Jane to take care of; for she went with him. The way it happened that two such children were sent to sea on such a long voyage, without any one to have them in charge, was this.

Rollo's father and mother had gone to Europe to make a tour, a year before this time, and had taken Rollo's brother Nathan, or Thanny, as Rollo used most frequently to call him, with them. They had gone partly for pleasure, but more especially on account of Mr. Holiday's health, which was not good. It was thought that the voyage, and the recreation and pleasure of travelling in Europe, would be a benefit to him. In certain cases where a person's health is impaired, especially when one is slowly recovering from past sickness, nothing is found to have a more beneficial effect upon the patient than for him to go away somewhere and have a good time. It was determined to try the effect of this remedy upon Mr. Holiday, and so he went to Europe. Mrs. Holiday went with him. They took Thanny too, to be company for them on the way. Thanny was at this time about seven years old.

A child of that age, for a travelling companion, is sometimes a source of great pleasure, and sometimes, on the other hand, he is the means of great annoyance and vexation. This depends upon whether he is obedient, patient, quiet, and gentle in his manners and demeanor, or noisy, inconsiderate, wilful, and intractable. A great many children act in such a manner, whenever they take a journey or go out to ride with their parents, that their parents, in self-defence, are obliged to adopt the plan of almost always contriving to leave them behind.

It was not so, however, with Nathan. He was an excellent boy in travelling, and always made the ride or the journey more pleasant for those who took him with them. This was the reason why, when it was determined that Mr. and Mrs. Holiday should go to England, that Mrs. Holiday was very desirous that Nathan should go too. And so far as Nathan was concerned, the voyage and the tour proved to be all that Mr. and Mrs. Holiday expected or desired. In regard to other points, however, it was less successful. Mr. Holiday did not improve in health, and he did not have a good time. Mrs. Holiday was anxious about her husband's health, and she was uneasy too at being separated so long from her other two children,—Rollo and little Jane, especially little Jane,—whom she had learned to love as if she were really her daughter. So, before the year was ended, they both heartily wished themselves back in America again.

But now Mr. Holiday's health grew worse, and he seemed too ill to return. This was in the month of May. It was decided by the physician, that it would not be best for him to attempt to return until September, and perhaps not until the following spring....