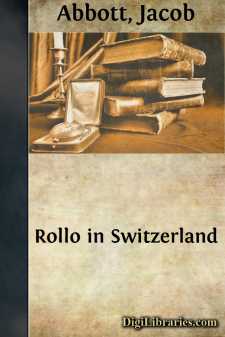 The last day that Rollo spent in Paris, before he set out on his journey into Switzerland, he had an opportunity to acquire, by actual experience, some knowledge of the nature of the passport system.

Before commencing the narrative of the adventures which he met with, it is necessary to premise that no person can travel among the different states and kingdoms on the continent of Europe without what is called a passport. The idea which prevails among all the governments of the continent is, that the people of each country are the subjects of the sovereign reigning there, and in some sense belong to him. They cannot leave their country without the written permission of the government, nor can they enter any other one without showing this permission and having it approved and stamped by the proper officers of the country to which they wish to go. There are, for example, at Paris ministers of all the different governments of Europe, residing in different parts of the city; and whoever wishes to leave France, to go into any other kingdom, must first go with his passport to the ministers of the countries which he intends to visit and get them to put their stamp upon it. This stamp represents the permission of the government whose minister affixes it that the traveller may enter the territory under their jurisdiction. Besides this, it is necessary to get permission from the authorities of Paris to leave the city. Nobody can leave France without this. This permission, too, like the others, is given by a stamp upon the passport. To get this stamp, the traveller must carry or send his passport to the great central police office of Paris, called the prefecture of police. Now, as the legations of the different governments and the prefecture of police are situated at very considerable distances from each other about the city, and as it usually takes some time to transact the business at each office, and especially as the inexperienced traveller often makes mistakes and goes to the wrong place, or gets at the right place at the wrong hour, it usually requires a whole day, and sometimes two days, to get his passport all right so as to allow of his setting out upon his journey. These explanations are necessary to enable the reader to understand what I now proceed to relate in respect to Rollo.

One morning, while Rollo and Jennie were at breakfast with their father and mother, Rollo's uncle George came in and said that he had concluded to go and make a little tour in Switzerland. "I shall have three weeks," said he, "if I can get away to-morrow; and that will give me time to take quite a little run among the mountains. I have come now to see if you will let Rollo go with me."

"Yes, sir," said Rollo, very eagerly, and rising at once from his chair. "Yes, sir. Let me go with him. That's exactly the thing. Yes, sir."

"Have you any objection?" said Mr. Holiday, quietly, turning towards Rollo's mother.

"No," said Mrs. Holiday, speaking, however, in a very doubtful tone,—"no; I don't know that I have—any great objection."

Whatever doubt and hesitation Mrs....