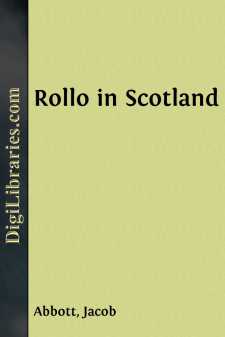 The Boy that was not loaded.

In the course of his travels in Europe, Rollo went with his uncle George one summer to spend a fortnight in Scotland.

There are several ways of going into Scotland from England. One way is to take a steamer from Liverpool, and go up the Clyde to Glasgow. This was the route that Mr. George and Rollo took.

On the way from Liverpool to Glasgow, Rollo became acquainted with a boy named Waldron Kennedy. Waldron was travelling with his father and mother and two sisters. His sisters were mild and gentle girls, and always kept near their mother; but Waldron seemed to be always getting into difficulty, or mischief. He was just about Rollo's age, but was a little taller. He was a very strong boy, and full of life and spirits. He was very venturesome, too, and he was continually frightening his mother by getting himself into what seemed to her dangerous situations. One morning, when she came up on deck, just after the steamer entered the mouth of the Clyde, she almost fainted away at seeing Waldron half way up the shrouds. He was poising himself there on one of the ratlines, resting upon one foot, and holding on with only one hand.

To prevent his doing such things, Waldron's mother kept him under the closest possible restraint, and would hardly let him go away from her side. She watched him, too, very closely all the time, and worried him with perpetual cautions. It was always, "Waldron, don't do this," or, "Waldron, you must not do that," or, "Waldron, don't go there." This confinement made Waldron very restless and uneasy; so that, on the whole, both he himself and his mother, too, had a very uncomfortable time of it.

"He worries my life out of me," she used to say, "and spoils all the pleasure of my tour. O, if he were only a girl!"

Mr. George had been acquainted with Mr. Kennedy and his family in New York, and they were all very glad to meet him on board the steamer.

On the morning after the steamer entered the mouth of the Clyde, Mrs. Kennedy and her daughters were sitting on a settee upon the deck, with books in their hands. From time to time they read in these books, and in the intervals they looked at the scenery. Waldron stood near them, leaning in a listless manner on the railing. Rollo came up to the place, and accosted Waldron, saying,—

"Come, Waldron, come with me."

"Hush!" said Waldron, in a whisper. "You go out there by the paddle box and wait a moment, till my mother begins to look on her book again, and then I'll steal away and come."

But Rollo never liked to obtain any thing by tricks and treachery, and so he turned to Mrs. Kennedy, and, in a frank and manly manner, said,—

"Mrs. Kennedy, may Waldron go away with me a little while?"

"Why, I am afraid, Rollo," said Mrs. Kennedy. "He always gets into some mischief or other the moment he is out of my sight."

"O, we shall be under my uncle George's care," said Rollo. "I am going out there where he is sitting."