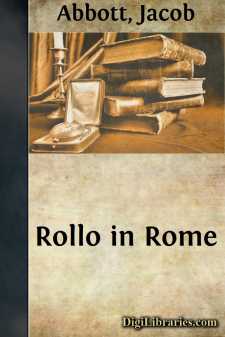 Rollo went to Rome in company with his uncle George, from Naples. They went by the diligence, which is a species of stage coach. There are different kinds of public coaches that ply on the great thoroughfares in Italy, to take passengers for hire; but the most common kind is the diligence.

The diligences in France are very large, and are divided into different compartments, with a different price for each. There are usually three compartments below and one above. In the Italian diligences, however, or at least in the one in which Mr. George and Rollo travelled to Rome, there were only three. First there was the interior, or the body of the coach proper. Directly before this was a compartment, with a glass front, containing one seat only, which looked forward; there were, of course, places for three persons on this seat. This front compartment is called the coupé. It is considered the best in the diligence.

There is also a seat up above the coupé, in a sort of second story, as it were; and this was the seat which Mr. George and Rollo usually preferred, because it was up high, where they could see better. But for the present journey Mr. George thought the high seat, which is called the banquette, would not be quite safe; for though it was covered above with a sort of chaise top, still it was open in front, and thus more exposed to the night air. In ordinary cases he would not have been at all afraid of the night air, but the country between Naples and Rome, and indeed the country all about Rome, in every direction, is very unhealthy. So unhealthy is it, in fact, that in certain seasons of the year it is almost uninhabitable; and it is in all seasons considered unsafe for strangers to pass through in the night, unless they are well protected.

There is, in particular, one tract, called the Pontine Marshes, where the road, with a sluggish canal by the side of it, runs in a straight line and on a dead level for about twenty miles. It so happened that in going to Rome by the diligence, it would be necessary to cross these marshes in the night, and this was an additional reason why Mr. George thought it better that he and Rollo should take seats inside.

The whole business of travelling by diligence in Europe is managed in a very different way from stage coach travelling in America. You must engage your place several days beforehand; and when you engage it you have a printed receipt given you, specifying the particular seats which you have taken, and also containing, on the back of it, all the rules and regulations of the service. The different seats in the several compartments of the coach are numbered, and the prices of them are different. Rollo went so early to engage the passage for himself and Mr. George that he had his choice of all the seats. He took Nos. 1 and 2 of the coupé. He paid the money and took the receipt. When he got home, he sat down by the window, while Mr. George was finishing his breakfast, and amused himself by studying out the rules and regulations printed on the back of his ticket....