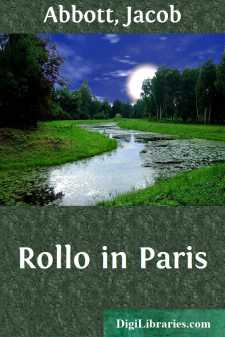 Chapter I. The Arrangements.

Gentlemen and ladies at the hotels, in London, generally dine about six or seven o'clock, each party or family by themselves, in their own private parlor. One evening, about eight o'clock, just after the waiter had removed the cloth from the table where Rollo's father and mother, with Rollo himself and his cousin Jennie, had been dining, and left the table clear, Mr. Holiday rose, and walked slowly and feebly—for he was quite out of health, though much better than he had been—towards a secretary which stood at the side of the room.

"Now," said he, "we will get out the map and the railway guide, and see about the ways of getting to France."

Rollo and Jennie were at this time at the window, looking at the vehicles which were passing by along the Strand. The Strand is a street of London, and one of the most lively and crowded of them all. As soon as Rollo heard his father say that he was going to get the map and the railway guide, he said to Jane,—

So they both went to the table, and there, kneeling up upon two cushioned chairs which they brought forward for the purpose, they leaned over upon the table where their father was spreading out the map, and thus established themselves very comfortably as spectators of the proceedings.

"Children," said Mr. Holiday, "do you come here to listen, or to talk?"

In obedience to this intimation, Rollo and Jane took care not to interrupt Mr. Holiday even to ask a question, but looked on and listened very patiently and attentively for nearly half an hour, while he pointed out to Mrs. Holiday the various routes, and ascertained from the guide books the times at which the trains set out, and the steamers sailed, for each of them, and also the cost of getting to Paris by the several lines. If the readers of this book were themselves actually in London, and were going to Paris, as Rollo and Jennie were, they would be interested, perhaps, in having all this information laid before them in full detail. As it is, however, all that will be necessary, probably, is to give such a general statement of the case as will enable them to understand the story.

By looking at any map of Europe, it will be seen that England is separated from France by the English Channel, a passage which, though it looks quite narrow on the map, is really very wide, especially toward the west. The narrowest place is between Dover and Calais, where the distance across is only about twenty-two miles. This narrow passage is called the Straits of Dover. It would have been very convenient for travellers that have to pass between London and Paris if this strait had happened to lie in the line, or nearly in the line, between these two cities; but it does not. It lies considerably to the eastward of it; so that, to cross the channel at the narrowest part, requires that the traveller should take quite a circuit round. To go by the shortest distance, it is necessary to cross the channel at a place where Dieppe is the harbor, on the French side, and New Haven on the English....