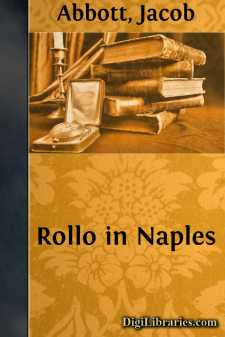 If ever you make a journey into Italy, there is one thing that you will like very much indeed; and that is the mode of travelling that prevails in that country. There are very few railroads there; and though there are stage coaches on all the principal routes, comparatively few people, except the inhabitants of the country, travel in them. Almost all who come from foreign lands to make journeys in Italy for pleasure, take what is called a vetturino.

There is no English word for vetturino, because where the English language is spoken, there is no such thing. The word comes from the Italian word vettura, which means a travelling carriage, and it denotes the man that owns the carriage, and drives it wherever the party that employs him wishes to go. Thus there is somewhat the same relation between the Italian words vettura and vetturino that there is between the English words chariot and charioteer.

The Italian vetturino, then, in the simplest English phrase that will express it, is a travelling carriage man; that is, he is a man who keeps a carriage and a team of horses, in order to take parties of travellers with them on long journeys, wherever they wish to go. Our word coachman does not express the idea at all. A coachman is a man employed by the owner of a carriage simply to drive it; whereas the vetturino is the proprietor of his establishment; and though he generally drives it himself, still the driving is only a small part of his business. He might employ another man to go with him and drive, but he would on that account be none the less the vetturino.

The vetturino usually takes the entire charge of the party, and provides for them in every respect,—that is, if they make the arrangement with him in that way, which they generally do, inasmuch as, since they do not, ordinarily, know the language of the country, it is much more convenient for them to arrange with him to take care of them than to attempt to take care of themselves. Accordingly, in making a journey of several days, as, for example, from Genoa to Florence, from Florence to Rome, or from Rome to Venice, or to Naples, the vetturino determines the length of each day's journey; he chooses the hotels where to stop, both at noon and for the night; he attends to the passports in passing the frontiers, and also to the examination of the baggage at the custom houses; and on arriving at the hotels he orders what the travellers require, and settles the bill the next morning. For all this the travellers pay him one round sum, which includes every thing. This sum consists of a certain amount for the carriage and horses, and an additional amount of about a dollar and a half or a dollar and three quarters a day, as agreed upon beforehand, for hotel expenses on the way. Thus, by this mode of travelling, the whole care is taken off from the traveller's mind, and he has nothing to do during the daytime but to sit in his carriage and enjoy himself, and at night to eat, drink, sleep, and take his comfort at the hotel.

It was at Florence that Mr....