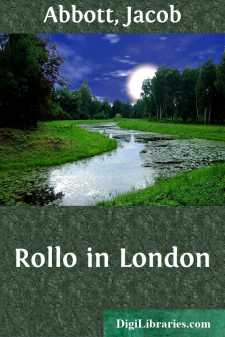 Chapter I. City and Town.

"Which London shall we visit first?" said Mr. George to Rollo.

"Why," rejoined Rollo, surprised, "are there two of them?"

"Yes," said Mr. George. "We may almost say there are two of them. Or, at any rate, there are two heads to the monster, though the immense mass forms but one body."

While Mr. George was saying these words Rollo had been standing on the step of the railway car and looking in at the window towards his uncle George, who was inside. Just at this time, however, the conversation was interrupted by the sound of the bell, denoting that the train was about to start. So Rollo jumped down from the step and ran back to his own car, which was a second-class car, two behind the one where Mr. George was sitting. He had scarcely got to his seat before the whistle of the conductor sounded and the train began to move. As it trundled along out of the station, gradually increasing its speed as it advanced, Rollo sat wondering what his uncle meant by the double-headed character which he had assigned to the monstrous city that they were going to see.

What is commonly called London does in fact consist, as Mr. George had said, of two great cities, entirely diverse from each other, and completely distinct—each being, in its way, the richest, the grandest, and the most powerful capital in the world.

One of these twin capitals is the metropolis of commerce; the other is that of political and military power.

The first is called the City.

The second is called the West End.

Both together—with the immense region of densely-peopled streets and squares which connect and surround them—constitute what is generally called London.

The city was the original London. The West End was at first called Westminster. The relative position of these two centres may be seen by the following map:—

The city—which was the original London—is the most ancient. It was founded long before the days of the Romans; so long, in fact, that its origin is wholly unknown. Nor is any thing known in respect to the derivation or meaning of the name. In regard to Westminster, the name is known to come from the word minster, which means cathedral—a cathedral church having been built there at a very early period, and which, lying west of London as it did, was called the West Minster. This church passed through a great variety of mutations during the lapse of successive centuries, having grown old, and been rebuilt, and enlarged, and pulled down, and rebuilt again, and altered, times and ways without number. It is represented in the present age by the venerable monumental pile—the burial-place of the ancient kings, and of the most distinguished nobles, generals, and statesmen of the English monarchy—known through all the world as Westminster Abbey.

After a time, when England became at length one kingdom, the king built his palace, and established his parliament, and opened his court in Westminster, not far from the abbey. The place, being about three miles from the city, was very convenient for this purpose....