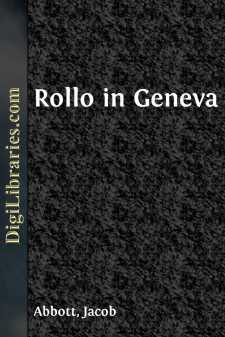 The Fame of Geneva.

Geneva is one of the most remarkable and most celebrated cities in Europe. It derives its celebrity, however, not so much from its size, or from the magnificence of its edifices, as from the peculiar beauty of its situation, and from the circumstances of its history.

Geneva is situated upon the confines of France, Switzerland, and Sardinia, at the outlet of the Lake of Geneva, which is perhaps the most beautiful, and certainly the most celebrated, lake in Switzerland. It is shaped like a crescent,—that is, like the new moon, or rather like the moon after it is about four or five days old. The lower end of the lake—that is, the end where Geneva is situated—lies in a comparatively open country, though vast ranges of lofty mountains, some of them covered with perpetual snow, are to be seen in the distance all around. All the country near, however, at this end of the lake, is gently undulating, and it is extremely fertile and beautiful. There are a great many elegant country seats along the shore of the lake, and on the banks of the River Rhone, which flows out of it. The waters of the lake at this end, and of the river which issues from it, are very clear, and of a deep and beautiful blue color. This blue color is so remarkable that it attracts the attention of every one who looks down into it from a bridge or from a boat, and there have been a great many suppositions and speculations made in respect to the cause of it; but I believe that, after all, nobody has yet been able to find out what the cause is.

The city of Geneva is situated exactly at the lower end of the lake, that is, at the western end; and the River Rhone, in coming out of the lake, flows directly through the town.

The lake is about fifty miles long, and the eastern end of it runs far in among the mountains. These mountains are very dark and sombre, and their sides rise so precipitously from the margin of the water that in many places there is scarcely room for a road along the shore. Indeed, you go generally to that end of the lake in a steamer; and as you advance, the mountains seem to shut you in completely at the end of the lake. But when you get near to the end, you see a narrow valley opening before you, with high mountains on either hand, and the River Rhone flowing very swiftly between green and beautiful banks in the middle of it. Besides the river, there is a magnificent road to be seen running along this valley. This is the great high road leading from France into Italy; and it has been known and travelled as such ever since the days of the old Romans.

The River Rhone, where it flows into the lake at the eastern end of it, is very thick and turbid, being formed from torrents coming down the mountain sides, or from muddy streams derived from the melting of the glaciers. At the western end, on the other hand, where it issues from the lake, the water is beautifully pellucid and clear. The reason of this is, that during its slow passage through the lake it has had time to settle....