Rolf in the Woods 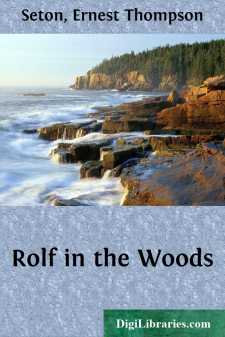 Chapter 1. The Wigwam Under the Rock

The early springtime sunrise was near at hand as Quonab, the last of the Myanos Sinawa, stepped from his sheltered wigwam under the cliff that borders the Asamuk easterly, and, mounting to the lofty brow of the great rock that is its highest pinnacle, he stood in silence, awaiting the first ray of the sun over the sea water that stretches between Connecticut and Seawanaky.

His silent prayer to the Great Spirit was ended as a golden beam shot from a long, low cloud-bank over the sea, and Quonab sang a weird Indian song for the rising sun, an invocation to the Day God:

"O thou that risest from the low cloudTo burn in the all above;I greet thee! I adore thee!"

Again and again he sang to the tumming of a small tom-tom, till the great refulgent one had cleared the cloud, and the red miracle of the sunrise was complete. Back to his wigwam went the red man, down to his home tucked dosed under the sheltering rock, and, after washing his hands in a basswood bowl, began to prepare his simple meal.

A tin-lined copper pot hanging over the fire was partly filled with water; then, when it was boiling, some samp or powdered corn and some clams were stirred in. While these were cooking, he took his smooth-bore flint-lock, crawled gently over the ridge that screened his wigwam from the northwest wind, and peered with hawk-like eyes across the broad sheet of water that, held by a high beaver-dam, filled the little valley of Asamuk Brook.

The winter ice was still on the pond, but in all the warming shallows there was open water, on which were likely to be ducks. None were to be seen, but by the edge of the ice was a round object which, although so far away, he knew at a glance for a muskrat.

By crawling around the pond, the Indian could easily have come within shot, but he returned at once to his wigwam, where he exchanged his gun for the weapons of his fathers, a bow and arrows, and a long fish-line. A short, quick stalk, and the muskrat, still eating a flagroot, was within thirty feet. The fish-line was coiled on the ground and then attached to an arrow, the bow bent—zip—the arrow picked up the line, coil after coil, and trans-fixed the muskrat. Splash! and the animal was gone under the ice.

But the cord was in the hands of the hunter; a little gentle pulling and the rat came to view, to be despatched with a stick and secured. Had he shot it with a gun, it had surely been lost.

He returned to his camp, ate his frugal breakfast, and fed a small, wolfish-looking yellow dog that was tied in the lodge.

He skinned the muskrat carefully, first cutting a slit across the rear and then turning the skin back like a glove, till it was off to the snout; a bent stick thrust into this held it stretched, till in a day, it was dry and ready for market. The body, carefully cleaned, he hung in the shade to furnish another meal.

As he worked, there were sounds of trampling in the woods, and presently a tall, rough-looking man, with a red nose and a curling white moustache, came striding through brush and leaves....