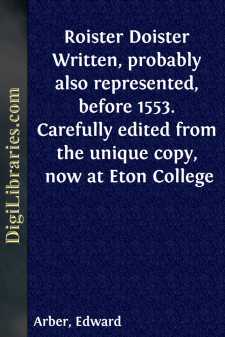 HE author and early date of the present Comedy are ascertained by a quotation in Sir Thomas Wilson’s Rule of Reason of Roister Doister’s letter to Dame Custance.

The first edition of the Rule of Reason, 1550-1, is a very scarce work; of which I have been unable to see a copy. The second edition, 1552, 8vo, ‘newely corrected by Thomas Wilson,’ has not the quotation: which apparently first appears in the third edition of 1553, 4to, the title of which runs, “The Rule of Reason, conteinyng the Arte of Logique. Sette furthe in Englishe, and newly corrected by Thomas Wilson. Anno Domini. M.D.LIII. Mense Ianuarij.”

At folio 66 of this edition, Wilson, in treating of The Ambiguitie, adds to his previous examples, Roister Doister’s letter, with the following heading:

¶ An example of soche doubtful writing, whiche by reason ofpoincting maie haue double sense, and contrariemeaning, taken out of an entreludemade by Nicolas Vdal.

The present comedy was therefore undoubtedly written before the close of the reign of Edward VI., who died 6 July 1553.

If it was then printed, that entire edition has perished. The prayer for the Queen at p. 86, can be for no other than Queen Elizabeth: and therefore, although the title-page is wanting and there is no conclusive allusion in the play, it may confidently be believed that the extant text was printed in Elizabeth’s reign: and that it had possibly in some respects been modified.

The missing title-page and the absence of any colophon in the Eton copy, here reprinted, preclude demonstrative proof that it is one of Hackett’s edition. It is however morally certain that it does represent that text.

On the whole, therefore, though that text was posthumous— Udall having died in Dec. 1556—: and though its authorship rests entirely on the above heading of Wilson’s quotation: it may be safely accepted that Udall is the author of this comedy, and that he wrote it before 1553. Conclusions both of them consonant with the known facts of Udall’s life.

Certain, however, it is that it was the custom of Eton, about the feast of St. Andrew, for the Master to choose some Latin stage-play for the boys to act in the following Christmas holidays, and that he might sometimes order smart and witty English plays. “Among the writings of Udall about the year 1540,” says Warton, “are recited Plures Comediæ, and a tragedy De Papatu, on the Papacy, written probably to be acted by his scholars;” and it is equally probable that the English comedy was written with a like object; for it is admirably adapted to be a good acting play, and the author avows in the prologue that his models were Plautus and Terence, with whose writings his scholars were familiar....