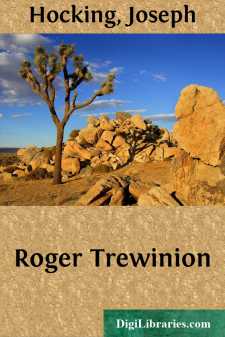 When visiting my native county some time since, I was struck with the modern, "up-to-date," aspect of men and things. In this respect Cornwall has much changed even during the twenty years since I left it. The quiet, old-world feeling which I can remember has gone, and instead there is a spirit of eagerness, almost amounting to rush. I discovered, too, that the old stories, dear to me, are forgotten. All the old superstitions have passed away. I remember asking a man whether there were any witches or ghosts in his vicinity. "Look," he said, in reply, pointing at a telegraph post, "they things 'ave destroyed boath witches and ghoasts." And yet, less than four decades ago, when I was a child, ghosts, witches, charms, omens, and the like were firmly believed in. Perhaps the most vivid remembrance I have of my childhood's days, are those connected with the weird stories of the supernatural which my mother used to tell us, as I with my brothers and sisters sat around a roaring fire on winter evenings. I called to mind, too, the haunted places, which I feared to pass after dark; but on inquiring of the new generation concerning these same places, I found an utter ignorance of their old-time reputation. Old Tommy Dain, the famous wizard, is forgotten, while Betsey Flew, she who could blight corn, cause milk to turn sour, and ill-wish all but the eldest son of a family, has no part in the life of the present generation. And yet I remember wearing, for months, a charm which old Betsey had prepared for me, with what result I cannot tell, save that I never had the disease from which the charm was to save me. As for curing warts, crooked legs, weak backs, and other ailments by the means used in the good old days—well, they are utterly forgotten. In short, Cornwall, which even in my boyish days was the very Mecca of Folklore and superstition, has been completely changed. The spirit of "modernity" is everywhere, and thus the old West Country has gone, and a new West Country has taken its place.

Whether this has been an unmixed blessing, or not, I have grave doubts; anyhow, the Cornwall I love to think about is the Cornwall of my boyhood, when apparitions from the spirit-land were common, when omens and charms were firmly believed in, and when the village parson had power to "lay a ghost," by reading the burial service a second time over a grave, and taking great care to turn the prayer-book "up-side-down."

Much of the story which is here offered to the public was written some years ago, when the memory of the old time was more vivid than it is now; and although it has been re-written, I trust I have retained in its pages something of the atmosphere of mystery and romance for which my native county was once so famous. Indeed, the prologue, while not absolutely true to fact, is true in spirit. The story is not mine at all, but was told me long years ago by those who were old when I was but a boy, and who had no doubt of the truth of what they related. I am afraid I have not pieced their somewhat confused narratives together very well, although one told me by an old dame with wild eyes, and a strong love for a "bit ov bacca," which is reproduced in the chapter entitled "The Vault under the Communion," haunts me even yet....