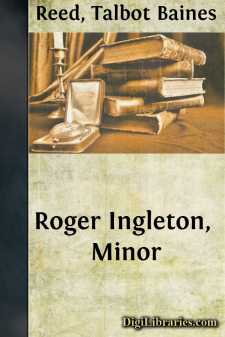 The snow lay thick round Maxfield Manor. Though it had been falling scarcely an hour, it had already transfigured the dull old place from a gloomy pile of black and grey into a gleaming vision of white. It lodged in deep piles in the angles of the rugged gables, and swirled up in heavy drifts against the hall-door. It sat heavily on the broad ivy-leaves over the porch, and blotted out lawn, path, and flowerbed in a universal pall of white velvet. The wind-flattened oaks in the park were become tables of snow; and away over the down, to the edge of the cliff itself, the dazzling canopy stretched, making the gulls as they skimmed its surface in troubled flight appear dingy, and the uneasy ocean beyond more than ever grey and leaden.

And the snow was falling still, and promised to make a night of it. At least so thought one of the inmates of the manor-house as he got up from his music-stool and casually looked out of the fast-darkening window, thanking his stars that it mattered little to him, in his cosy bachelor-den, whether it went on a night or a fortnight. This complacent individual was a man at whom one would be disposed to look twice before coming to any definite conclusion respecting him. At the first glance you might put him down for twenty-five; at the second, you would wonder whether you had possibly made a slight miscalculation of twenty years. His keen eyes, his smooth face, his athletic figure, his somewhat dandified dress were all in favour of the young man. The double line across his brow, the enigmas about his lips, the imperturbable gravity of his features bespoke the elder. Handsome he was not—he was hardly good-looking, and the nervous twitch of his eyebrow as it came down over his single eye-glass constantly disfigured him. What was his temper, his character, his soul, you might sit for a month before him and never discover. But from his deep massive chest, his long arms, his lithe step, and the poise of his head upon his broad shoulders, you would probably conclude that his enemy, if he had one, would do well not to frequent the same dark lane as Mr Frank Armstrong.

This afternoon, as he draws his curtain and lights his lamp, he is passably content with himself and the world; for he has just discovered a new volume of Schumann that takes his fancy. He has no quarrel, therefore, with the snow, except that by its sudden arrival it will probably hold his promising pupil, Master Roger, prisoner for the night at Castleridge, where he and his mother have driven for dinner. The tutor has sufficient interest in his work to make him regret this interruption of his duties, but for the present he will console himself with Schumann. So he returns to his music-stool—the one spot in creation where he allows that he can be really happy—and loses himself in a maze of sweet sound.

So engrossed is he in his congenial occupation, that he is quite unaware of the door behind him opening and a voice saying—

“Beg pardon, sir, but the master wants you.”

Raffles, the page-boy, who happened to be the messenger, was obliged to deliver his summons three times—the last time with the accompaniment of a tap on the tutor’s shoulder—before that virtuoso swung round on his stool and demanded—

Mr Armstrong was inclined to compliment Raffles on his Latin, but on second thoughts (the tutor’s second thoughts murdered a great number of his good sayings) he considered that neither the page nor himself would be much better for the jest, and spared himself....