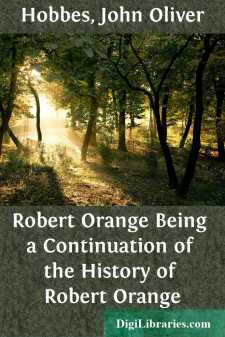 One afternoon during the first weeks of October, 1869, while wind, dust, and rain were struggling each for supremacy in the streets, a small yellow brougham, swung in the old-fashioned style on cumbersome springs and attached to a pair of fine greys, was standing before the Earl of Garrow's town residence in St. James's Square. The hall clock within that mansion chimed four, the great doors were thrown open by two footmen, and a young lady wearing a mauve silk skirt deeply flounced, a black cloth jacket embroidered in gold, and a mauve hat trimmed with plumes—appeared upon the threshold. She paused for a moment to admire the shrubs arranged in boxes on each window-sill, the crimson vines that brightened the grey walls; to criticise the fresh brown rosette under the near horse's ear; to bestow a swift glance upon the harness, the coachman's livery, and the groom's boots. Then she stepped into the carriage and gave her order—

“To the Carlton Club.”

The groom climbed on to his seat, and the horses, after a brilliant display of their well-disciplined mettle, suffered themselves to be driven, at an easy pace, toward Pall Mall.

Lady Sara-Louise-Tatiana-Valérie De Treverell, only child of the ninth Earl of Garrow, had been, since her mother's death, the mistress of his house and his chief companion. Essentially a woman of emotions, she was, nevertheless, in appearance somewhat dreamy, romantic, even spiritual. The eyes were blue, bright as a cut sapphire, and shone, as it were, through tears. Her mouth, uneven in its line, had a scarlet eloquence more pleasing than sculpturesque severity. At the moment, she wore no gloves, and her tapering fingers shared their characteristic with her nose, which also tapered, with exquisite lightness of mould, into a point. For colour, she had a gypsy's red and brown. The string of gold beads which she fastened habitually round her throat showed well against the warm tints in her cheek; her long pearl earrings caught in certain lights the dark shadow of her hair—hair black, abundant, and elaborately dressed in the fashion of that time. Passionate yet calculating, imperious yet susceptible of control, generous yet given to suspicion, an egoist yet capable of self-abandoning enthusiasm—she represented a type of feminine character often recognised but rarely understood.

On this particular afternoon in October she had some pressing matters on her mind. She was considering, among other things, an offer of marriage which she had received by post two days before from a nobleman of great fortune, the Duke of Marshire. But Sara was ambitious—not mercenary. She wanted power. Power, unhappily, was the last thing one could associate with the estimable personality of the suitor under deliberation.

“I must tell papa,” she said to herself, “that it would never do.”

Here she fell into a reverie; but as her expression changed from one of annoyance to something of wistfulness and sentimentality, the question of marriage with the Duke of Marshire had clearly been dismissed for that moment from her heart. At intervals a shy smile gave an almost childish tenderness to her face. Then, on a sudden, her eyelashes would droop, she would start with a sigh, and, apparently caught by some unwelcome remembrance, sink into a humour as melancholy as it was mysterious. Quiet she sat, absorbed in her own emotions, heedless alike of the streets through which she was passing and the many acquaintances who bowed as she drove by. It was her daily custom, when in town, to call at the Carlton Club for her father and take him for a short drive round the Park before his tea. To-day he was already waiting on the club steps as the brougham halted before the entrance. He smiled, joined Lady Sara at once, and seating himself by her side in his usual corner, maintained his usual imperturbable reserve. As a rule, during these excursions he would either doze, or jot down ideas in his note-book, or hum one of the few songs he cared to hear: “Go tell Augusta, gentle swain,” “Revenge, revenge, Timotheus cries,” and “She wore a wreath of roses.” This time, however, he did neither of these things, but watched the reflection of his daughter's face in the carriage window before him....