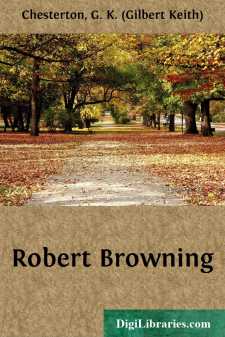 CHAPTER I BROWNING IN EARLY LIFE

On the subject of Browning's work innumerable things have been said and remain to be said; of his life, considered as a narrative of facts, there is little or nothing to say. It was a lucid and public and yet quiet life, which culminated in one great dramatic test of character, and then fell back again into this union of quietude and publicity. And yet, in spite of this, it is a great deal more difficult to speak finally about his life than about his work. His work has the mystery which belongs to the complex; his life the much greater mystery which belongs to the simple. He was clever enough to understand his own poetry; and if he understood it, we can understand it. But he was also entirely unconscious and impulsive, and he was never clever enough to understand his own character; consequently we may be excused if that part of him which was hidden from him is partly hidden from us. The subtle man is always immeasurably easier to understand than the natural man; for the subtle man keeps a diary of his moods, he practises the art of self-analysis and self-revelation, and can tell us how he came to feel this or to say that. But a man like Browning knows no more about the state of his emotions than about the state of his pulse; they are things greater than he, things growing at will, like forces of Nature. There is an old anecdote, probably apocryphal, which describes how a feminine admirer wrote to Browning asking him for the meaning of one of his darker poems, and received the following reply: "When that poem was written, two people knew what it meant—God and Robert Browning. And now God only knows what it means." This story gives, in all probability, an entirely false impression of Browning's attitude towards his work. He was a keen artist, a keen scholar, he could put his finger on anything, and he had a memory like the British Museum Library. But the story does, in all probability, give a tolerably accurate picture of Browning's attitude towards his own emotions and his psychological type. If a man had asked him what some particular allusion to a Persian hero meant he could in all probability have quoted half the epic; if a man had asked him which third cousin of Charlemagne was alluded to in Sordello, he could have given an account of the man and an account of his father and his grandfather. But if a man had asked him what he thought of himself, or what were his emotions an hour before his wedding, he would have replied with perfect sincerity that God alone knew.

This mystery of the unconscious man, far deeper than any mystery of the conscious one, existing as it does in all men, existed peculiarly in Browning, because he was a very ordinary and spontaneous man. The same thing exists to some extent in all history and all affairs. Anything that is deliberate, twisted, created as a trap and a mystery, must be discovered at last; everything that is done naturally remains mysterious. It may be difficult to discover the principles of the Rosicrucians, but it is much easier to discover the principles of the Rosicrucians than the principles of the United States: nor has any secret society kept its aims so quiet as humanity....