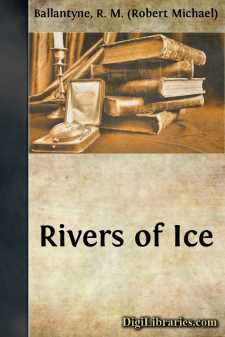 On a certain summer morning, about the middle of the present century, a big bluff man, of seafaring aspect, found himself sauntering in a certain street near London Bridge. He was a man of above fifty, but looked under forty in consequence of the healthful vigour of his frame, the freshness of his saltwater face, and the blackness of his shaggy hair.

Although his gait, pilot-cloth coat, and pocketed hands proclaimed him a sailor, there were one or two contradictory points about him. A huge beard and moustache savoured more of the diggings than the deep, and a brown wide-awake with a prodigiously broad brim suggested the backwoods.

Pausing at the head of one of those narrow lanes which—running down between warehouses, filthy little rag and bone shops, and low poverty-stricken dwellings—appear to terminate their career, not unwillingly, in the Thames, the sailor gazed before him with nautical earnestness for a few seconds, then glanced at the corner house for a name; found no name; cast his eyes up to the strip of blue sky overhead, as if for inspiration; obtained none; planted his legs wide apart as if he had observed a squall coming, and expected the lane to lurch heavily—wrinkled his eyebrows, and pursed his lips.

“Lost yer bearin’s, capp’n?” exclaimed a shrill pert voice at his side.

The seaman looked down, and beheld a small boy with a head like a disorderly door-mat, and garments to match. He stood in what may be styled an imitative attitude, with his hands thrust into his ragged pockets, his little legs planted wide apart, his cap thrust well back on his head, and his eyebrows wrinkled. He also pursed his lips to such an extent that they resembled a rosebud in a dirty bush.

“Yes, imp,” replied the seaman—he meant to have said “impudence,” but stopped at the first syllable as being sufficiently appropriate—“yes, imp, I have lost my bearings, and I’ll give you a copper if you’ll help me to find ’em.”

“Wot sort o’ copper?” demanded the urchin, “there’s three sorts of ’em, you know, in this ’ere kingdom—which appears to be a queendom at present—there’s a farding and a ha’penny and a penny. I mention it, capp’n,” he added apologetically, “in case you don’t know, for you look as if you’d come from furrin parts.”

The seaman’s look of surprise melted into a broad grin of amusement while this speech was being fluently delivered. At its conclusion he pulled out a penny and held it up.

“Well, it ain’t much,” said the small boy, “and I ain’t used to hire myself out so cheap. However, as you seem to be raither poorly off, I don’t mind if I lend you a hand for that. Only, please, don’t mention it among your friends, as it would p’raps lower their opinion of you, d’you see? Now then w’ot d’you want to know?”

To this the “capp’n,” still smiling at the small boy’s precocious insolence, replied that he was in search of an old woman who dwelt in a small court styled Grubb’s Court, so he was told, which lay somewhere in that salubrious neighbourhood, and asked if he, the imp, knew of such a place....