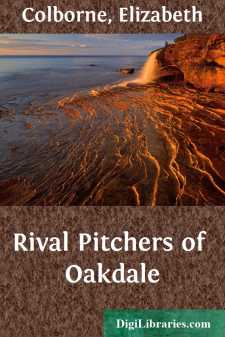 CHAPTER I. THE BOY WHO WANTED TO PITCH.

During the noon intermission of a sunny April day a small group of boys assembled near the steps of Oakdale Academy to talk baseball; for the opening of the season was at hand, and the germ of the game had already begun to make itself felt in their blood. Roger Eliot, the grave, reliable, steady-headed captain of the nine, who had scored such a pronounced success as captain of the eleven the previous autumn, was the central figure of that gathering. Chipper Cooper, Ben Stone, Sleuth Piper, Chub Tuttle, Sile Crane and Roy Hooker formed the remainder of the assemblage.

"The field will be good and dry to-night, fellows," said Roger, "and we ought to get in some much-needed practice for that game with Barville. I want every fellow to come out, sure."

"Ho!" gurgled Chub Tuttle, cracking a peanut and dexterously nipping the double kernel into his mouth. "We'll be there, though I don't believe we need much practice to beat that Barville bunch. We ate 'em up last year."

"We!" said Sleuth Piper reprovingly. "If my memory serves me, you warmed the bench in both those games."

"That wasn't my fault," retorted Tuttle cheerfully. "I was ready and prepared to play. I was on hand to step in as a pinch hitter, or to fill any sort of a gap at a moment's notice."

"A pinch hitter!" whooped little Chipper Cooper. "Now, you would have cut a lot of ice as a pindi hitter, wouldn't you? You never made a hit in a game in all your life, Chub, and you know you were subbing simply because Roy got on his ear and wouldn't play. We had to have some one for a spare man."

"I would have played," cut in Hooker sharply, somewhat resentfully, "if I'd been given a square deal. I wanted a chance to try my hand at some of the pitching; but, after that first game, Ames, the biggest mule who ever captained a team, wouldn't give me another show. I wasn't going to play right field or sit around on the bench as a spare man."

Hooker had a thin, sharp face, with eyes set a trifle too close together, and an undershot jaw, which gave him a somewhat pugnacious appearance. He was a chap who thought very well indeed of himself and his accomplishments, and held a somewhat slighting estimation of others. In connection with baseball, he had always entertained an overweening ambition to become a pitcher, although little qualified for such a position, either by temperament or acquired skill. True, he could throw the curves, and had some speed, but at his best he could not find the plate more than once out of six times, and, when disturbed or rattled, he was even worse. Like many another fellow, he erroneously believed that the ability to throw a curved ball was a pitcher's chief accomplishment.

"It was lucky Springer developed so well as a twirler last year," observed Eliot.

"Lucky!" sneered Hooker. "Why, I don't recollect that he did anything worth bragging about. He lost both those games against Wyndham."

"We had to depend on him alone," said Roger; "and he was doing too much pitching....