Ridgway of Montana (Story of To-Day, in Which the Hero Is Also the Villain) 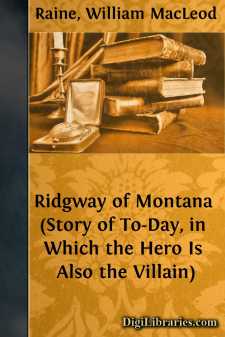 CHAPTER 1. TWO MEN AND A WOMAN

The young woman who was giving the last touches to the very effective picture framed in her long looking-glass nodded almost imperceptibly.

She had come to the parting of the ways, and she knew it, with a shrewd suspicion as to which she would choose. She had asked for a week to decide, and her heart-searching had told her nothing new. It was characteristic of Virginia Balfour that she did not attempt to deceive herself. If she married Waring Ridgway it would be for what she considered good and sufficient reasons, but love would not be one of them. He was going to be a great man, for one thing, and probably a very rich one, which counted, though it would not be a determining factor. This she could find only in the man himself, in the masterful force that made him what he was. The sandstings of life did not disturb his confidence in his victorious star, nor did he let fine-spun moral obligations hamper his predatory career. He had a genius for success in whatever he undertook, pushing his way to his end with a shrewd, direct energy that never faltered. She sometimes wondered whether she, too, like the men he used as tools, was merely a pawn in his game, and her consent an empty formality conceded to convention. Perhaps he would marry her even if she did not want to, she told herself, with the sudden illuminating smile that was one of her chief charms.

But Ridgway's wary eyes, appraising her mood as she came forward to meet him, read none of this doubt in her frank greeting. Anything more sure and exquisite than the cultivation Virginia Balfour breathed he would have been hard put to it to conceive. That her gown and its accessories seemed to him merely the extension of a dainty personality was the highest compliment he could pay her charm, and an entirely unconscious one.

"Have I kept you waiting?" she smiled, giving him her hand.

His answering smile, quite cool and unperturbed, gave the lie to his words. "For a year, though the almanac called it a week."

"You must have suffered," she told him ironically, with a glance at the clear color in his good-looking face.

"Repressed emotion," he explained. "May I hope that my suffering has reached a period?"

They had been sauntering toward a little conservatory at the end of the large room, but she deflected and brought up at a table on which lay some books. One of these she picked up and looked at incuriously for a moment before sweeping them aside. She rested her hands on the table behind her and leaned back against it, her eyes meeting his fairly.

"You're still of the same mind, are you?" she demanded.

She lifted herself to the table, crossing her feet and dangling them irresponsibly. "We might as well be comfy while we talk;" and she indicated, by a nod, a chair.

"Thanks. If you don't mind, I think I'll take it standing."

She did not seem in any hurry to begin, and Ridgway gave evidence of no desire to hasten her. But presently he said, with a little laugh that seemed to offer her inclusion in the joke:

"I'm on the anxious seat, you know—waiting to find out whether I'm to be the happiest man alive."

"You know as much about it as I do." She echoed his laugh ruefully....