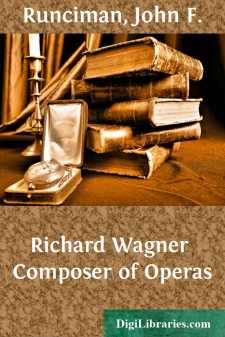 It is now one hundred years since Richard Wagner was born, thirty since he died. In every land he has his monument in one shape or another; his music-dramas can be heard all the world over; all the ancient controversies as to their merits or demerits have died down. The Bayreuth theatre, the outward and visible sign of his inner greatness, has risen to the point of its most splendid glory and lapsed into the limbo of tenth-rate things. Every one who really cares for the art of music, and especially the art of opera (of which art music is by far the most important factor), has had ample time and opportunity for making up his mind. It is, therefore, high time to simplify and to cease from elaborating. In this book will be found, I trust, no special pleading, no defence or extenuation, no preposterous eulogy on the one hand, and on the other no vampire work, but a plain and concise attempt to depict the mighty artist as he lived and to describe his artistic achievement as it is. We have all had time to consider and to sort out (so to say) the reams that have been written and printed about Wagner: the bulk of it has had to be thrown on the scrap-heap: what there was of value has, I hope, been utilised.

An author who plans a book on an artist or an artistic question must be wary, especially at the beginning of his adventure. To start away with a theory, whether new or old, and to yield to the seductive temptation to convince humanity of its truth—this is to lay a trap and to take the path that leads straight into it. Theories should be kept for scientific matters. A work proving that parallel straight lines never meet need not land the writer in self-contradictions; and another writer may prove that they must and do meet, and still avoid getting tangled amongst his own arguments. I even read a book once in which it was clearly shown that the earth was flat; and, granted a ludicrous premise, one could but admire the irrefragable logic with which the conclusion was reached. With regard to art, be your premises sound or grotesque, the result is the same—muddle. Logic, science, philosophy, applied to art, spell certain disaster. With mingled pain and amusement I have noted how more than one writer on music, setting out in triumphant high spirits to demonstrate this or that, has before his third chapter demonstrated just the contrary: I have never seen anything else occur.

Wagner wrote so much about himself and his art, and appeared so fully satisfied with his explanations of why he became just what he became and of why his art was just what it was, that naturally for nearly a generation his critics fell into one or other of two errors. Either they accepted his theorisings unreservedly or as unreservedly they rejected them. In the second case they had to face the difficulty of coining, shaping, a theory of their own; in either case shipwreck nearly always promptly ensued; and on the whole, if Wagner had to be theorised about, one would prefer to have it done by Wagner. He himself knew the tiny value of his theorisings about his art, for he declared that when he wrote Tristan and Isolda he found he had already left his theories far behind. This discovery might well have served as a warning both to Wagner and to the hosts of his commentators. Unluckily Wagner was far too fond of theorising, moralising and generally talking of himself and his works, and he reckoned he had a big propagandist work to do; so he went on scribbling to the end. As for the commentators, they neglected the warning and took Wagner's later doings as an example, with the result that the library shelves of Europe are stopped and blocked with as big a heap of rubbish as ever was provoked by great works of art since the world began to turn round. For Wagner there is an ample excuse: he honestly thought it necessary to spread his ideas abroad; his aims and intentions had been so misunderstood, and so stupidly, wickedly, recklessly misrepresented, that he did not believe his music-dramas would ever find acceptance until he had cleared the way by explaining himself. Little good came of it—in fact, the only good result was that some of his writings fell into the hands of Ludwig II of Bavaria, and thus led to the ending of his days of misery, and indirectly to Bayreuth....