Richard of Jamestown : a Story of the Virginia Colony 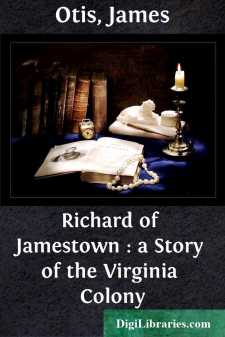 Yes, my name is Richard Mutton. Sounds rather queer, doesn't it? The lads in London town used to vex me sorely by calling, "Baa, baa, black sheep," whenever I passed them, and yet he who will may find the name Richard Mutton written in the list of those who were sent to Virginia, in the new world, by the London Company, on the nineteenth day of December, in the year of Our Lord, 1606.

Whosoever may chance to read what I am here setting down, will, perhaps, ask how it happened that a lad only ten years of age was allowed to sail for that new world in company with such a band of adventurous men as headed the enterprise.

Therefore it is that I must tell a certain portion of the story of my life, for the better understanding of how I came to be in this fair, wild, savage beset land of Virginia.

Yet I was not the only boy who sailed in the Susan Constant, as you may see by turning to the list of names, which is under the care, even to this day, of the London Company, for there you will find written in clerkly hand the names Samuel Collier, Nathaniel Peacock, James Brumfield, and Richard Mutton. Nathaniel Peacock has declared more than once that my name comes last in the company at the very end of all, because I was not a full grown mutton; but only large enough to be called a sheep's tail, and therefore should be hung on behind, as is shown by the list.

The reason of my being in this country of Virginia at so young an age, is directly concerned with that brave soldier and wondrous adventurer, Captain John Smith, of whom I make no doubt the people in this new world, when the land has been covered with towns and villages, will come to know right well, for of a truth he is a wonderful man. In the sixth month of Grace, 1606, I Was living as best I might in that great city of London, which is as much a wilderness of houses, as this country is a wilderness of trees. My father was a soldier of fortune, which means that he stood ready to do battle in behalf of whatsoever nation he believed was in the right, or, perhaps, on the side of those people who would pay him the most money for risking his life.

He had fought with the Dutch soldiers under command of one Captain Miles Standish, an Englishman of renown among men of arms, and had been killed. My mother died less than a week before the news was brought that my father had been shot to death. Not then fully understanding how great a disaster it is to a young lad when he loses father or mother, and how yet more sad is his lot when he has lost both parents, I made shift to live as best I might with a sore heart; but yet not so sore as if I had known the full extent of the misfortune which had overtaken me.

At first it was an easy matter for me to get food at the home of this lad, or of that, among my acquaintances, sleeping wherever night overtook me; but, finally, when mayhap three months had gone by, my welcome was worn threadbare, and I was told by more than one, that a hulking lad of ten years should have more pride than to beg his way from door to door....