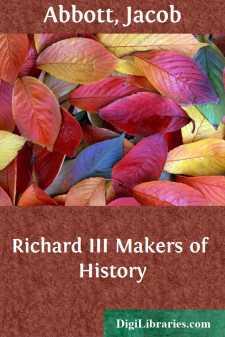 Richard's Mother. The great quarrel between the houses of York and Lancaster.Terrible results of the quarrel.Origin of it.

The mother of King Richard the Third was a beautiful, and, in many respects, a noble-minded woman, though she lived in very rude, turbulent, and trying times. She was born, so to speak, into one of the most widely-extended, the most bitter, and the most fatal of the family quarrels which have darkened the annals of the great in the whole history of mankind, namely, that long-protracted and bitter contest which was waged for so many years between the two great branches of the family of Edward the Third—the houses of York and Lancaster—for the possession of the kingdom of England. This dreadful quarrel lasted for more than a hundred years. It led to wars and commotions, to the sacking and burning of towns, to the ravaging of fruitful countries, and to atrocious deeds of violence of every sort, almost without number. The internal peace of hundreds of thousands of families all over the land was destroyed by it for many generations. Husbands were alienated from wives, and parents from children by it. Murders and assassinations innumerable grew out of it. And what was it all about? you will ask. It arose from the fact that the descendants of a certain king had married and intermarried among each other in such a complicated manner that for several generations nobody could tell which of two different lines of candidates was fairly entitled to the throne. The question was settled at last by a prince who inherited the claim on one side marrying a princess who was the heir on the other. Thus the conflicting interests of the two houses were combined, and the quarrel was ended.

But, while the question was pending, it kept the country in a state of perpetual commotion, with feuds, and quarrels, and combats innumerable, and all the other countless and indescribable horrors of civil war.

SCENES OF CIVIL WAR. Intricate questions of genealogy and descent.

The two branches of the royal family which were engaged in this quarrel were called the houses of York and Lancaster, from the fact that those were the titles of the fathers and heads of the two lines respectively. The Lancaster party were the descendants of John of Gaunt, Duke of Lancaster, and the York party were the successors and heirs of his brother Edmund, Duke of York. These men were both sons of Edward the Third, the King of England who reigned immediately before Richard the Second. A full account of the family is given in our history of Richard the Second. Of course, they being brothers, their children were cousins, and they ought to have lived together in peace and harmony. And then, besides being related to each other through their fathers, the two branches of the family intermarried together, so as to make the relationships in the following generations so close and so complicated that it was almost impossible to disentangle them. In reading the history of those times, we find dukes or princes fighting each other in the field, or laying plans to assassinate each other, or striving to see which should make the other a captive, and shut him up in a dungeon for the rest of his days; and yet these enemies, so exasperated and implacable, are very near relations—cousins, perhaps, if the relationship is reckoned in one way, and uncle and nephew if it is reckoned in another....