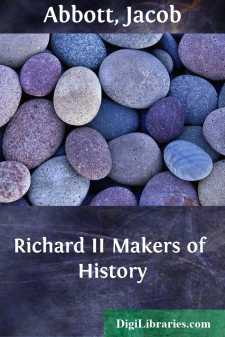 There have been three monarchs of the name of Richard upon the English throne.

Richard I. is known and celebrated in history as Richard the Crusader. He was the sovereign ruler not only of England, but of all the Norman part of France, and from both of his dominions he raised a vast army, and went with it to the Holy Land, where he fought many years against the Saracens with a view of rescuing Jerusalem and the other holy places there from the dominion of unbelievers. He met with a great many remarkable adventures in going to the Holy Land, and with still more remarkable ones on his return home, all of which are fully related in the volume of this series entitled King Richard I.

Richard II. did not succeed Richard I. immediately. Several reigns intervened. The monarch who immediately succeeded Richard I. was John. John was Richard's brother, and had been left in command, in England, as regent, during the king's absence in the Holy Land.

After John came Henry III. and the three Edwards; and when the third Edward died, his son Richard II. was heir to the throne. He was, however, too young at that time to reign, for he was only ten years old.

Character of the kings and nobles of those days.

The kings in these days were wild and turbulent men, always engaged in wars with each other and with their nobles, while all the industrial classes were greatly depressed. The nobles lived in strong castles in various places about the country, and owned, or claimed to own, very large estates, which the laboring men were compelled to cultivate for them. Some of these castles still remain in a habitable state, but most of them are now in ruins—and very curious objects the ruins are to see.

RUINS OF AN ANCIENT CASTLE. Origin and nature of their power.

The kings held their kingdoms very much as the nobles did their estates—they considered them theirs by right. And the people generally thought so too. The king had a right, as they imagined, to live in luxury and splendor, and to lord it over the country, and compel the mass of the people to pay him nearly all their earnings in rent and taxes, and to raise armies, whenever he commanded them, to go and fight for him in his quarrels with his neighbors, because his father had done these things before him. And what right had his father to do these things? Why, because his father had done them before him. Very well; but to go back to the beginning. What right had the first man to assume this power, and how did he get possession of it? This was a question that nobody could answer, for nobody knew then, and nobody knows now, who were the original founders of these noble families, or by what means they first came into power. People did not know how to read and write in the days when kings first began to reign, and so no records were made, and no accounts kept of public transactions; and when at length the countries of Europe in the Middle Ages began to emerge somewhat into the light of civilization, these royal and noble families were found every where established....