Richard I Makers of History 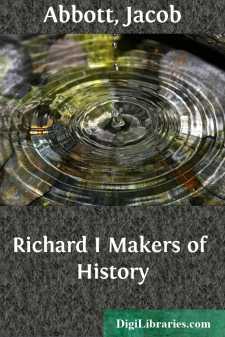 King Richard the First, the Crusader, was a boisterous, reckless, and desperate man, and he made a great deal of noise in the world in his day. He began his career very early in life by quarreling with his father. Indeed, his father, his mother, and all his brothers and sisters were engaged, as long as the father lived, in perpetual wars against each other, which were waged with the most desperate fierceness on all sides. The subject of these quarrels was the different possessions which the various branches of the family held or claimed in France and in England, each endeavoring to dispossess the others. In order to understand the nature of these difficulties, and also to comprehend fully what sort of a woman Richard's mother was, we must first pay a little attention to the map of the countries over which these royal personages held sway.

Richard's kingdom.Union of England and Normandy.England was a possession of Normandy.

We have already seen, in another volume of this series, how the two countries of Normandy on the Continent, and of England, became united under one government. England, however, did not conquer and hold Normandy; it was Normandy that conquered and held England. The relative situation of these two countries is shown on the map. Normandy, it will be seen, was situated in the northern part of France, being separated from England by the English Channel. Besides Normandy, the sovereigns of the country held various other possessions in France, and this French portion of the compound realm over which they reigned they considered as far the most important portion. England was but a sort of appendage to their empire.

You will see by the map the situation of the River Loire. It rises in the centre of France, and flows to the westward, through a country which was, even in those days, very fertile and beautiful. South of the Loire was a sort of kingdom, then under the dominion of a young and beautiful princess named Eleanora. The name of her kingdom was Aquitaine. This lady afterward became the mother of Richard. She was very celebrated in her day, and has since been greatly renowned in history under the name of Eleanora of Aquitaine.

The contemporaries of Eleanora.Royal match-making.

Eleanora received her realm from her grandfather. Her father had gone on a crusade with his brother, Eleanora's uncle, Raymond, and had been killed in the East. Raymond had made himself master of Antioch. We shall presently hear of this Raymond again. The grandfather abdicated in Eleanora's favor when she was about fourteen years of age. There were two other powerful sovereigns in France at this time, Louis, King of France, who reigned in Paris, and Henry, Duke of Normandy and King of England. King Louis of France had a son, the Prince Louis, who was heir to the crown. Eleanora's grandfather formed the scheme of marrying her to this Prince Louis, and thus to unite his kingdom to hers....