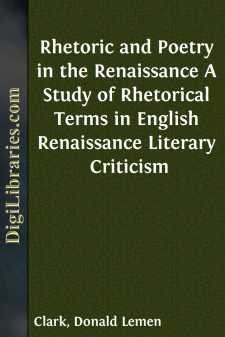 By definition the renaissance was primarily a literary and scholarly movement derived from the literature of classical antiquity. Thus the historical, philosophical, pedagogical, and dramatic literatures of the renaissance cannot be accurately understood except in the light of the Greek and Roman authors whose writings inspired them. To this general rule the literary criticism of the renaissance is no exception. The interpretation of the critical terms used by the literary critics of the English renaissance must depend largely on the classical tradition. This tradition, as the labors of many scholars, especially Spingarn, have shown, reached England both directly through the publication of classical writings and to an even greater degree indirectly through the commentaries and original treatises of Italian scholars.

The indebtedness to the Italian critics is well known and has been widely discussed. Although the present study does not hope to add to what is known of the influence exerted on the literary criticism of the English renaissance by the Italians, it does propose to show the English critics to have been more indebted than has been supposed to the mediaeval development of classical theory. For this relationship to be clear it will be necessary to review classical literary criticism and to trace its development in post-classical times and in the middle ages as well as in the Italian renaissance. Only by such an approach will it be possible to show in what form classical theory was transmitted to the English renaissance.

As the restoration of the Stuarts to the throne of England inaugurated a new period in English criticism, during which English critical theories were largely influenced by French criticism, this study will stop short of this, restricting itself to the years between the publication of Thomas Wilson's Arte of Rhetorique in 1553 and that of Ben Jonson's Timber in 1641. Throughout this period the English medi?val tradition of classical theory was highly important, losing ground but gradually as the influence first of the rhetoric newly recovered from the classics and then of Italian criticism produced an increasingly stronger effect on English criticism. I hope to show that the English critics who formulated theories of poetry in the renaissance derived much of their critical terminology, not directly from the rediscovered classical theories of poetry, but through various channels from classical theories and practice of rhetoric. The tendency to use the terminology of rhetoric in discussing poetical theory did not originate in the English renaissance, but is largely an inheritance from classical criticism as interpreted by the middle ages. Both in England and on the continent this medi?val tradition persisted far into the renaissance. Renaissance English writers on the theory of poetry use to an extent hitherto unexplored the terminology of rhetoric. This rhetorical terminology was derived from three sources: directly to some extent from the classical rhetorics themselves; indirectly through the influence of classical rhetoric upon the terminology of the Italian critics of poetry; and indirectly, to a considerable extent, through the medi?val modifications of classical and post-classical rhetoric.

1. The Distinction between Rhetoric and Poetic

Aristotle wrote two treatises on literary criticism: the Rhetoric and the Poetics. The fact that he gave separate treatment to his critical consideration of oratory and of poetry is presumptive evidence that in his mind oratory and poetry were two things, having much in common perhaps, but distinguished by fundamental differences. With less philosophical basis these fundamental differences were maintained by nearly all the classical literary critics. It is important, therefore, to review briefly what the classical writers meant by rhetoric and by poetic, and to trace the modifications which these terms underwent in post-classical times, in the middle ages, and in the renaissance, in order better to show that in the literary criticism of the English renaissance the theory of poetry contained many elements which historically derive from classical and mediaeval rhetoric.

Literature--the spoken and the written word--was divided by the classical critics into philosophy, history, oratory, and poetry. Thus Aristotle, in addition to treating the theory of poetry and the theory of oratory in separate books, asserts that even though the works of philosophy and of history were composed in verse, they would still be something different from poetry.[] Lucian severely criticises the historians whose writings are like those of the poets.[] Quintilian advises students of rhetoric against imitating the style of the historians because it is too much like that of the poets.[] Clearly these critical writers are insisting on some fundamental difference between the forms of communication in language--a difference which they thought their contemporaries were in some danger of ignoring.

If the number of critical writings devoted to these different forms of communication is taken as a criterion, rhetoric ranks first, poetry second, and history third. This preponderance of rhetoric may be one reason for the tendency of the critics who wrote on the theory of poetry to use much of the terminology of rhetoric, and for the ease with which a modern student can formulate the classical theory of rhetoric, as compared with the difficulty he has in formulating the theory of poetry.

To the Greeks and Romans rhetoric meant the theory of oratory. As a pedagogical mechanism it endeavored to teach students to persuade an audience. The content of rhetoric included all that the ancients had learned to be of value in persuasive public speech. It taught how to work up a case by drawing valid inferences from sound evidence, how to organize this material in the most persuasive order, how to compose in clear and harmonious sentences. Thus to the Greeks and Romans rhetoric was defined by its function of discovering means to persuasion and was taught in the schools as something that every free-born man could and should learn.

In both these respects the ancients felt that poetic, the theory of poetry, was different from rhetoric. As the critical theorists believed that the poets were inspired, they endeavored less to teach men to be poets than to point out the excellences which the poets had attained....