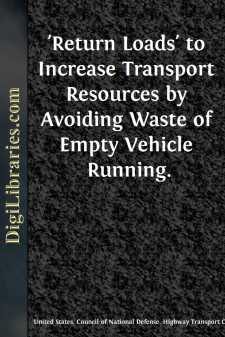 To increase the highways transport resources as one of the means of strengthening the entire transportation system of the country, and for the purpose of avoiding the waste incurred by running transport vehicles empty, return-load bureaus are established. These bureaus are a means of bringing together the shipper having goods to move and the operator of an empty vehicle which is possibly running to the point for which the goods to be shipped are destined.

With the cooperation of State councils of defense, chambers of commerce, local war boards, and other organizations the Council of National Defense, through its Highways Transport Committee and its State Councils Section, is building up a system for the efficient utilization of the highways of the country as a means of strengthening the Nation's transportation resources and affording merchants and manufacturers relief from necessary railroad embargoes and delays due to freight congestion.

These activities encompass, briefly, and in the order named, the following:

Elimination of empty running of trucks by bringing together shipper and truck owner in such way as to provide full loads wherever possible.

Rapid development, over fixed routes, of daily power-vehicle service, with definite schedules of stops and charges and provision made for gathering shipments both on outgoing and incoming trips.

Substitution of adequate truck service that the intracity and short-haul service of rail carriers may be relieved and partially supplanted; the relief of congested terminals, and an effective store-door delivery plan.

Making transportation more efficient through encouragement of such use of highways transport as will eliminate making trips with part loads, the loss of time in loading and unloading, and unnecessary delays in the handling of receipts.

By taking part of the burden of the "short haul" off the railroads and placing it on motor trucks operating over the highways, millions of tons of merchandise and materials are transported satisfactorily and the railroads are given much needed relief. The motive power and cars thus freed from short-haul work can be employed in very important long-distance service. The Railroad Administration has indorsed motor transportation for this work and reported that this form of relief will make it possible for the railroads to operate more effectively under the present traffic congestion; hence shippers using the highways are assisting in the solution of transportation problems and rendering a patriotic service. It is also to be noted that if shippers use the highways for short hauls and thus relieve the railroads of a burden, they assist in improving general conditions so that they will indirectly benefit by having more prompt service on long-distance shipments.