Return-Loads Bureaus To Save Waste In Transportation 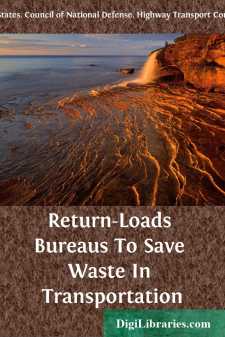 Relief from Railroad Delays and Embargoes.

Through the cooperation of State Councils of Defense, Chambers of Commerce, local War Boards, and Motor Clubs, the Council of National Defense, through its Highways Transport Committee and its State Councils Section is building up a system for more efficient utilization of the highways of the country as a means of affording merchants and manufacturers relief from railroad embargoes and delays due to freight congestion.

This system already is in successful operation in Connecticut and is being extended throughout the country.

The purpose is to take some of the burden of the short haul off the railroads and put it on motor trucks operating over the highways. Very considerable quantities of merchandise and materials of all kinds are now being carried by trucks operated by private concerns in their own businesses and by motor express and haulage companies. In a majority of cases, however, these trucks, after delivering a load, return empty, whereas there are shippers who would be glad to avail themselves of the opportunity to send a load back on such a truck to its home town if they knew it was going back empty. On the other hand, the truck owner would be equally glad to secure a return load because the charge made for hauling it would reduce his own haulage cost.

To bring the shipper and truck owner together serves the interests of both. It doubles the efficiency of the motor truck, enables business men to make prompt shipments or secure deliveries in a day instead of several, relieves the railroads of much short-haul freight, and thereby releases cars for necessary long-distance haulage of munitions, equipment, and other supplies for our Army in France, and for foodstuffs, fuel, etc., for the civilian population at home.

Chambers of Commerce Bring Shipper and Truck Owner Together.

The logical agency for bringing the two interests together is the local business men's organization in each locality—the Chamber of Commerce, Board of Trade, or by whatever name it is known. They are in direct touch with the manufacturers and merchants in their respective communities, they know the present difficulties of shipping and they have the facilities for most quickly and systematically putting the shipper in touch with the man who has the facility for haulage.

The method of doing this is by the establishment of a Return-Loads Bureau—an information department that acts as a clearing house for this particular purpose. Once initiated, the work of such a bureau can, in most cities, be carried on by a single employee of the Chamber, probably in addition to his other duties. If necessary or desirable, a small charge can be made to the truck owner or the shipper for the service to cover whatever expense may be involved in starting and maintaining the bureau. But the plan affords an opportunity to be of such additional service to members of the organization and to business interests of the city generally that the increased support which may be gained through it should offset the cost incurred....