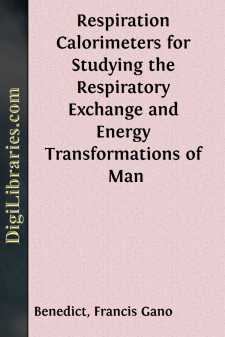 The establishment in Boston of an inquiry into the nutrition of man with the construction of a special laboratory for that purpose is a direct outcome of a series of investigations originally undertaken in the chemical laboratory of Wesleyan University, in Middletown, Connecticut, by the late Prof. W. O. Atwater. Appreciating the remarkable results of Pettenkofer and Voit and their associates, as early as 1892 he made plans for the construction of a respiration apparatus accompanied by calorimetric features. The apparatus was designed on the general ventilation plan of the above investigators, but in the first description of this apparatus it is seen that the method used for the determination of carbon dioxide and water-vapor was quite other than that used by Voit. Each succeeding year of active experimenting brought about new developments until, in 1902, the apparatus was essentially modified by changing it from the open-circuit type to the closed-circuit type of Regnault and Reiset. This apparatus, thus modified, has been completely described in a former publication. The calorimetric features likewise underwent gradual changes and, as greater accuracy was desired, it was found impracticable to conduct calorimetric investigations to the best advantage in the basement of a chemical laboratory. With four sciences crowded into one building it was practically impossible to devote more space to these researches. Furthermore, the investigations had proceeded to such an extent that it seemed desirable to construct a special laboratory for the purpose of carrying out the calorimetric and allied investigations on the nutrition of man.

In designing this laboratory it was planned to overcome the difficulties experienced in Middletown with regard to control of the room-temperature and humidity, and furthermore, while the researches had heretofore been carried on simultaneously with academic duties, it appeared absolutely necessary to adjust the research so that the uninterrupted time of the experimenters could be given to work of this kind. Since these experiments frequently continued from one to ten days, their satisfactory conduct was not compatible with strenuous academic duties.

As data regarding animal physiology began to be accumulated, it was soon evident that there were great possibilities in studying abnormal metabolism, and hence the limited amount of pathological material available in Middletown necessitated the construction of the laboratory in some large center.

A very careful consideration was given to possible sites in a number of cities, with the result that the laboratory was constructed on a plot of ground in Boston in the vicinity of large hospitals and medical schools. Advantage was taken, also, of the opportunity to secure connections with a central power-plant for obtaining heat, light, electricity, and refrigeration, thus doing away with the necessity for private installation of boilers and electrical and refrigerating machinery....