Reproduction of Copyrighted Works By Educators and Librarians 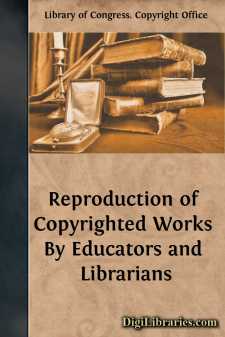 The documentary materials collected in this booklet deal withreproduction of copyrighted works by educators, librarians, andarchivists for a variety of uses, including:  + Reproduction for teaching in educational institutions at all levels;    and  + Reproduction by libraries and archives for purposes of study,    research, interlibrary exchanges, and archival preservation.

The documents reprinted here are limited to materials dealing withreproduction. Under the copyright law, reproduction can take either oftwo forms:  + The making of copies: by photocopying, making micro-form    reproductions, videotaping, or any other method of duplicating    visually-perceptible material; and  + The making of phonorecords: by duplicating sound recordings, taping    off the air, or any other method of recapturing sounds.

The copyright law also contains various provisions dealing with importations, performances, and displays of copyrighted works for educational and other noncommercial purposes, but they are outside the scope of this booklet. You can obtain a copy of the statute and information about specific provisions by writing to the Publications Section, LM-455, Copyright Office, Library of Congress, Washington, D.C. 20559-6000.

*A Note on the Documents Reprinted*

The documentary materials in this booklet are reprints or excerpts from six sources:

5. The Congressional Debates. This booklet contains excerpts from the Congressional Record of September 22, 1976, reflecting statements on the floor of Congress at the time the bill was passed by the House of Representatives (122 CONG. REC. H 10874-76, daily edition, September 22,1976).

Items 2 and 3 on this list—the 1975 Senate Report and the 1976 House Report—present special problems. On many points the language of these two reports is identical or closely similiar. However, the two reports were written at different times, by committees of different Houses of Congress, on somewhat different bills. As a result, the discussions on some provisions of the bills vary widely, and on certain points they disagree.

The disagreements between the Senate and House versions of the bill itself were, of course, resolved when the Act of 1976 was finally passed....