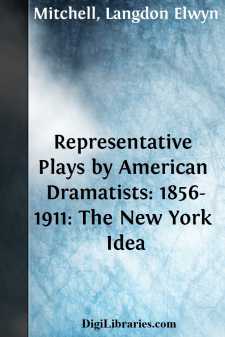 The performance of "The New York Idea" at the Lyric Theatre, New York, on November 19, 1906, was one of the rare, distinguished events in the American Theatre. It revealed the fact that at last an American playwright had written a drama comparable with the very best European models, scintillating with clear, cold brilliancy, whose dialogue carried with it an exceptional literary style. It was a play that showed a vitality which will serve to keep it alive for many generations, which will make it welcome, however often it is revived; for there is a universal import to its satire which raises it above the local, social condition it purports to portray. And though there is nothing of an ideal character about its situations, though it seems to be all head, with a minimum of apparent heart, it none the less is universal in the sense that Restoration comedy is universal. It presents a type of vulgarity, of sporting spirit, that is common in every generation, whether in the time of Congreve and Wycherley, whether in the period of Sheridan or Oscar Wilde. Its wit is not dependent on local colour, though ostensibly it is written about New York. On its first presentment, it challenged good writing on the part of the critics. High Comedy always does that—tickles the brain and stimulates it, drives it at a pace not usually to be had in the theatre. Is it comedy or is it farce, the critics queried? Is Mr. Mitchell sincere, and does he flay the evil he so photographically portrays? Does he treat the sacred subject of matrimony too flippantly? And should the play, in order to be effective, have a moral tag, or should it be, what on the surface it appears to be, a series of realistic scenes about people whom one cannot admire and does not want to know intimately? Some of the writers found the picture not to their liking—that is the effect good satire sometimes has when it strikes home. Yet when Grace George revived "The New York Idea" in a spirit so different from Mrs. Fiske's, nine years after, on September 28, 1915, at the Playhouse, New York, the Times was bound to make the following confession: "A vast array of American authors have turned out plays innumerable, but not one of them has quite matched in sparkling gayety and wit this work of Langdon Mitchell's. And the passing years have left its satire still pointed. They have not dimmed its polish nor so much as scratched its smart veneer."

The play was written expressly for Mrs. Fiske. Its hard, sharp interplay of humour was knowingly cut to suit her hard, sharp method of acting. Her interpretation was a triumph of head over heart. Grace George tried to read into Cynthia Karslake an element of romance which is suggested in the text, but which was somewhat over-sentimentalized by her soft portrayal. There is some element of relationship between "The New York Idea" and Henry Arthur Jones' "Mary Goes First;" there is the same free air of sporting life, so graphically set forth in "Lord and Lady Algy." But the American play is greater than these because of its impersonal strain.

In a letter to the present Editor, Mr. Mitchell has broken silence regarding the writing of "The New York Idea." Never before has he tried to analyze its evolution. He says:

The play was written for Mrs. Fiske. The choice of subject was mine. I demanded complete freedom in the treatment, and my most wise manager, Mr. Harrison Grey Fiske, accorded this. The play was produced and played as written, with the exception of one or two short scenes, which were not acceptable to Mrs. Fiske; that is, she felt, or would have felt, somewhat strained or unnatural in these scenes. Accordingly, I cut them out, or rather rewrote them. The temperament of the race-horse has to be considered—much more, that of the 'star'.

When I was writing the play, I had really no idea of satirizing divorce or a law or anything specially temperamental or local. What I wanted to satirize was a certain extreme frivolity in the American spirit and in our American life—frivolity in the deep sense—not just a girl's frivolity, but that profound, sterile, amazing frivolity which one observes and meets in our churches, in political life, in literature, in music; in short, in every department of American thought, feeling and action. The old-fashioned, high-bred family in "The New York Idea" are solemnly frivolous, and the fast, light-minded, highly intelligent hero and heroine are frivolous in their own delightful way—frivolity, of course, to be used for tragedy or comedy. Our frivolity is, I feel, on the edge of the tragic. Indeed, I think it entirely tragic, and there are lines, comedy lines, in "The New York Idea," that indicate this aspect of the thing.

Of course, there is more than merely satire or frivolity in the play: there is the Englishman who appears to Americans to be stupid on account of his manner, but who is frightfully intelligent; and there are also the energy and life and vigor of the two men characters. There is, too, throughout the play, the conscious humour of these two characters, and of the third woman, Vida....