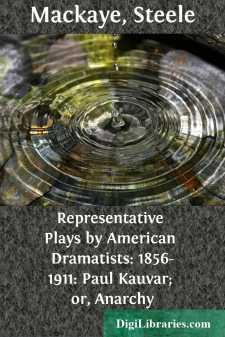 When one realizes the sociological purpose behind Steele Mackaye's "Paul Kauvar; or, Anarchy," it is interesting to note how inefficient the old form of drama was to carry anything more than the formal romantic fervour. Compared with John Galsworthy's treatment in "Strife" and "Justice," it makes one glad that realism came and washed away all the obscuring claptrap of that period. Daly, Boucicault, and their generation were held firmly in its grip; they could not get away from it, and they were justified in their loyalty to it by the insistent claim "The Two Orphans" and "The Lady of Lyons" had upon the public. All the more credit, therefore, that Bronson Howard, David Belasco, and James A. Herne escaped it; had the latter completely freed himself of melodrama, his plays would be better known to-day, better capable of revival, because of the true greatness of their simple realistic patches.

But where Mackaye vitalized the old style was in the vigour of his treatment. He loved the large scene, the mob movement; and he worked with a big brush. As Nym Crinkle, the popular New York World dramatic critic of the day, wrote: "Whatever else he may be, [he] is not a 'lisping hawthorne bud'! He doesn't embroider such napkins as the 'Abbé Constantin', and he can't arrange such waxworks as 'Elaine'. He can't stereoscope an emotion, but he can incarnate it if you give him people enough."

Mackaye's mind was large, resourceful, daring—both in the opinions it upheld, and the practical theatrical innovations it introduced into the theatre, like the double stage for the little Madison Square playhouse, in New York, which was the precursor of such modern paraphernalia as came later with the foreign revolving stages. He always stood on the threshold of modernism, advocating those principles which were to fructify in the decades to follow him. Such pioneer spirit was evident in his ardent advocacy of Delsarte methods of acting; his own work as an actor was coloured and influenced by the master whose pupil he became in the early years of his career. When one recalls the methods of Wallack, and his shy approach toward anything which was "natural," it seems very advanced to hear Mackaye echoing the Delsarte philosophy. This advocacy was nowhere better demonstrated than when, at a breakfast given him at the New York Lotos Club, he talked on the rationale of art for two hours, and held spell-bound the attention of Longfellow, Bryant, Louis Agassiz, James J. Fields, E.P. Whipple, Edwin Booth and others. He once said:

A man to be a true actor must not only possess the power to portray vividly the emotions which in any given situation would be natural to himself, but he must study the character of the man whom he impersonates, and then act as that man would act in a like situation.

Mackaye's devotion to Delsarte was manifest in the many practical ways he aided his teacher; he was rewarded by being left most of his master's manuscripts. This passionate interest in the technique of acting not only enriched his own work, but, in 1872, prompted him to open a Delsarte house (the St....