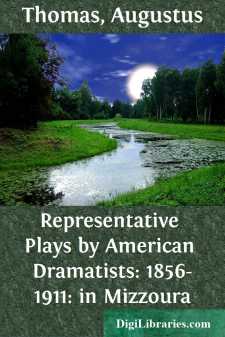 It is not a new thing for a dramatic author to write prefaces to his plays. We are fortunate in possessing a series of personal opinions in this form that constitute a valuable asset in determining individual attitude and technical purpose. Read Schiller's opening remarks to "The Robbers," Victor Hugo's famous opinions affixed to "Cromwell" and his equally enlightening comments introducing "Hernani," and you can judge the value autobiographically and philosophically.

The American dramatist has not been given, as a general rule, to such self-examination; he has contented himself with supplying the fashions of the day in the theatre, and has left to the ubiquitous press-agent the special prerogative of whetting public curiosity as to what manner of man he is and as to the fabric from which his play has been cut. There has been no effort, thus far, on the part of literary executors, in the cases, for example, of Bronson Howard or James A. Herne, to preserve the correspondence of these men, so much of which dealt with the circumstances surrounding them while writing or the conditions affecting them while rehearsing. These data would be invaluable in preserving a perspective which the modern historian of the American theatre so wofully lacks.

All the more significant, therefore, is the edition of Mr. Augustus Thomas's works, now being issued by Messrs. Samuel French. Thus far the "autobiographies" of six plays have been prepared by the dramatist in a charming, reminiscent vein. The present Editor is privileged to make use of one, describing the evolution of "In Mizzoura," and this inclusion removes from him the necessity of commenting too lengthily on that play, for fear of creating an anti-climax.

Read consecutively, the prefaces suggest Mr. Thomas's mental equipment, his charm and distinction of personality, the variety of his experiences which have given him a man's observation of people and of things. The personalia are dropped in casually, here and there, not so much for the purpose of specific biography, as to illustrate the incentives which shaped his thought and enriched his invention as a playwright. His purpose in writing these forewords is just a little didactic; he addresses the novice who may be befuddled after reading various "Techniques of the Drama," and who looks to the established and successful dramatist for the secrets of his workshop. These prefaces reveal Thomas as working more with chips than with whole planks from a virgin forest. He confesses as much, when he talks of "Mrs. Leffingwell's Boots." It was "salvage," he writes, "it was the marketing of odds and ends and remnants, utterly useless for any other purpose." Yet, with the technical dexterity, which is Mr. Thomas's strongest point, he pieced a bright comedy picture together—a very popular one, too. In the course of his remarks, he says, "When I had the art department on the old St. Louis Republican—" "There is an avenue of that name [Leffingwell] in St....