Representation of Deities of the Maya Manuscripts Papers of the Peabody Museum of American Archaeology and Ethnology, Harvard University, Vol. 4, No. 1 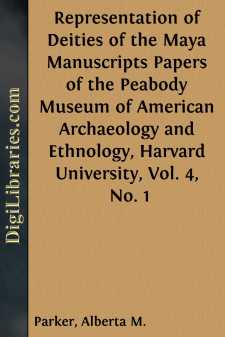 THE MATERIAL OF THE MANUSCRIPTS.

The three manuscripts which we possess of the ancient Maya peoples of Central America, the Dresden (Dr.), the Madrid (Tro.-Cort.) and the Paris (Per.) manuscripts, all contain a series of pictorial representations of human figures, which, beyond question, should be regarded as figures of gods. Together with these are a number of animal figures, some with human bodies, dress and armor, which likewise have a mythologic significance.

The contents of the three manuscripts, which undoubtedly pertain to the calendar system and to the computation of time in their relation to the Maya pantheon and to certain religious and domestic functions, admit of the conclusion, that these figures of gods embody the essential part of the religious conceptions of the Maya peoples in a tolerably complete form. For here we have the entire ritual year, the whole chronology with its mythological relations and all accessories. In addition to this, essentially the same figures recur in all three manuscripts. Their number is not especially large. There are about fifteen figures of gods in human form and about half as many in animal form. At first we were inclined to believe that further researches would considerably increase the number of deities, but this assumption was incorrect. After years of study of the subject and repeated examination of the results of research, it may be regarded as positively proved, that the number of deities represented in the Maya manuscripts does not exceed substantially the limits mentioned above. The principal deities are determined beyond question.

The way in which this was accomplished is strikingly simple. It amounts essentially to that which in ordinary life we call “memory of persons” and follows almost naturally from a careful study of the manuscripts. For, by frequently looking attentively at the representations, one learns by degrees to recognize promptly similar and familiar figures of gods, by the characteristic impression they make as a whole, or by certain details, even when the pictures are partly obliterated or exhibit variations, and the same is true of the accompanying hieroglyphs. A purely inductive, natural science-method has thus been followed, and hence this pamphlet is devoted simply to descriptions and to the amassing of material. These figures have been taken separately out of the manuscripts alone, identified and described with the studious avoidance of all unreliable, misleading accounts and of all presumptive analogies with supposedly allied mythologies.

Whatever cannot be derived from the manuscripts themselves has been wholly ignored. Hypotheses and deductions have been avoided as far as possible. Only where the interpretation, or the resemblance and the relations to kindred mythologic domains were obvious, and where the accounts agreed beyond question, has notice been taken of the fact so that the imposed limitations of this work should not result in one-sidedness.

Since, for the most part, the accounts of Spanish authors regarding the mythology of the Mayas correspond only slightly or not at all with these figures of gods, and all other conjectures respecting their significance are very dubious, the alphabetic designation of the deities, which was tentatively introduced in the first edition of this work, has been preserved. This designation has proved to be practical. For the plate at the end of this pamphlet, examples as characteristic as possible of the individual figures of gods have been selected from the manuscripts.

It is a well known fact that we possess no definite knowledge either of the time of the composition or of the local origin of the Maya manuscripts. The objection might, therefore, be raised that it is a hazardous proceeding to treat the material derived from these three manuscripts in common, as if it were homogeneous. But these researches themselves have proved beyond a doubt, that the mythologic import of the manuscripts belongs to one and the same sphere of thought. Essentially the same deities and the same mythologic ideas are, without question, to be found in all the manuscripts.

The material of the inscriptions has been set entirely at one side, because the style of representation contained in them, both of the mythologic forms and of the hieroglyphs, renders comparison exceedingly difficult. In this field especial credit is due to Förstemann and Seler, for the work they have done in furtherance of interpretation, and mention should not be omitted of the generosity with which the well known promoter of Americanist investigations, the Duke of Loubat, has presented to the Berlin Museum of Ethnology costly originals of reliefs and inscriptions for direct study. The representations on the reliefs from the Maya region, it is true, give evidence of dealing with kindred mythologic conceptions. Figures and hieroglyphs of gods, made familiar by the manuscripts, can also be found here and there....